A Visit With Governor Andrew 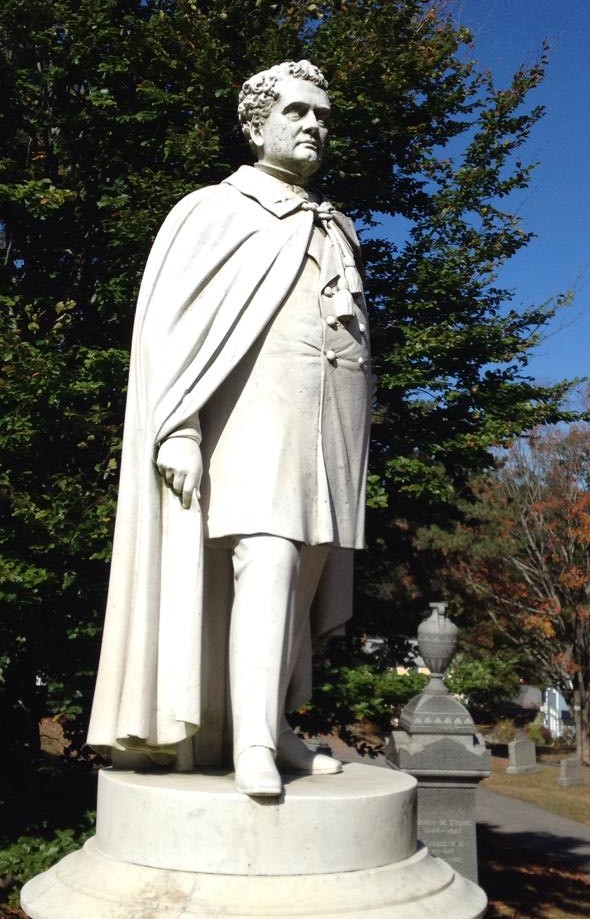 Today I took advantage of a day off from work and beautiful weather to drive down the coast to the Hingham Cemetery to visit the final resting place of Governor John A. Andrew. The headstone is very simple, but a few years after his death a group of admirers commissioned a beautiful statue sculpted in Cararra marble in Florence, Italy. I am still very much in the early stages of my Andrew project. I made it through the first volume of Henry G. Pearson’s 1904 biography along with a number of other secondary sources. With three days off next week I hope to finally sink my teeth into the Andrew Papers at the Massachusetts Historical Society.

Any biography project is an enormous undertaking, but one of the things that helps to make it more manageable is the fact that Andrew died relatively early in 1867. The timing helps to frame this as a Civil War biography. No reason to wade into the complexity of Gilded Age America and no worrying about how the politics of the period might have shaped Andrew’s views on emancipation and black civil rights, which defined his time on Beacon Hill.

As we all know the postwar challenges of Reconstruction, party politics, and a new agenda steered many Republicans away from their wartime priorities, especially when it came to the place of African Americans in a reunited nation. Such a trajectory adds a great deal for historians, who are interested in such things as tracking motivation and measuring conviction. For now Andrew gets to bask in the light of having been ahead of the curve in reference to emancipation and the recruitment of black soldiers.

Even without the potential “fall from grace” that comes with a longer life I am hoping to find a slightly more interesting and nuanced story about Andrew’s role in the war than what we currently have. The only thing that can stop me now is his handwriting, which is a disaster.