Why Does a College Dropout Focus So Much on College Life?

I’ve always enjoyed visiting the blog from which this screenshot was taken. On occasion a post thoughtfully addresses some aspect of Southern/Civil War history or memory, but most of the time it’s more of what you find below – a response to writers such as myself who dares to research or comment on a specific region of the country in which they were not born or raised. 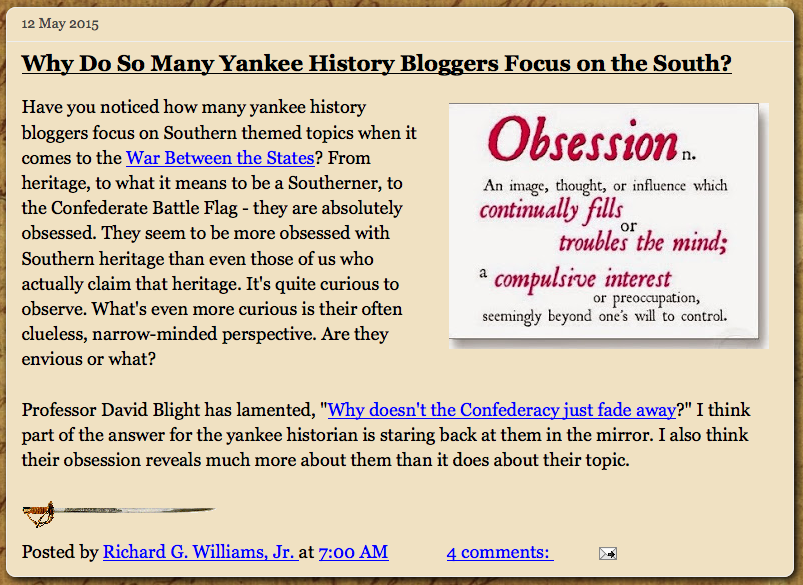 I can’t speak for anyone else, but having lived in Alabama and Virginia, I find the history of this region to be absolutely fascinating. There are important historical questions to address and it goes without saying that I find the many challenges of how the history is remembered to be worthy of serious attention. Ultimately, it’s part of American history. The title of the post is an attempt to challenge the legitimacy of what someone like myself, who currently lives in a Northern state, writes about another part of the country. It ought not to be a concern. One could make the same argument about a Northerner who chooses to focus on the history of the West or an American who writes about another part of the world entirely.

To illustrate just how absurd this post is, let’s take this one step further and re-write it to drive the point home. Anyone who has visited the above site over time is aware of this blogger’s deep-seated mistrust of college education. Let’s just say there is a good deal of frustration and mistrust.

Have you noticed how many posts on the current state of college education have been written by an individual who, during the course of his life, has spent a minimal time in college, and ultimately never graduated? From examining specific courses to the political profiles of college professors he is absolutely obsessed. He seems to be more obsessed with the current state of college education than even those of us who actually have spent considerable time on campus and have earned college degrees. It’s quite curious to observe. What’s even more curious is his often clueless, narrow-minded perspective. Is he envious or what? I think his obsession reveals much more about himself than it does about the topic.

Of course, this is an entirely unfair faux post. The blogger in question has every right to comment on the state of college education. Whether he has a college degree is irrelevant. The only thing that matters is the quality of what is written.

Now back to your regularly scheduled programming.

Next post: Crater Books For Sale Direct From Author