It Was Ten Years Ago Today

Ten years ago today I wrote my first blog post. Below is a screenshot of what the site looked like during that first week. I couldn’t help but chuckle as I explored the page. At first glance it looks so incredibly flimsy and bare, but that is only in light of what has changed over the last decade. What you see remains the core of the site. For much of its life I thought of Civil War Memory as a blog, but I now think of it as a website that contains a blog. This is, in part, a function of how blogging platforms like WordPress have evolved over the years, but it has much more to do with the way in which blogging has transformed my life as an educator and historian. 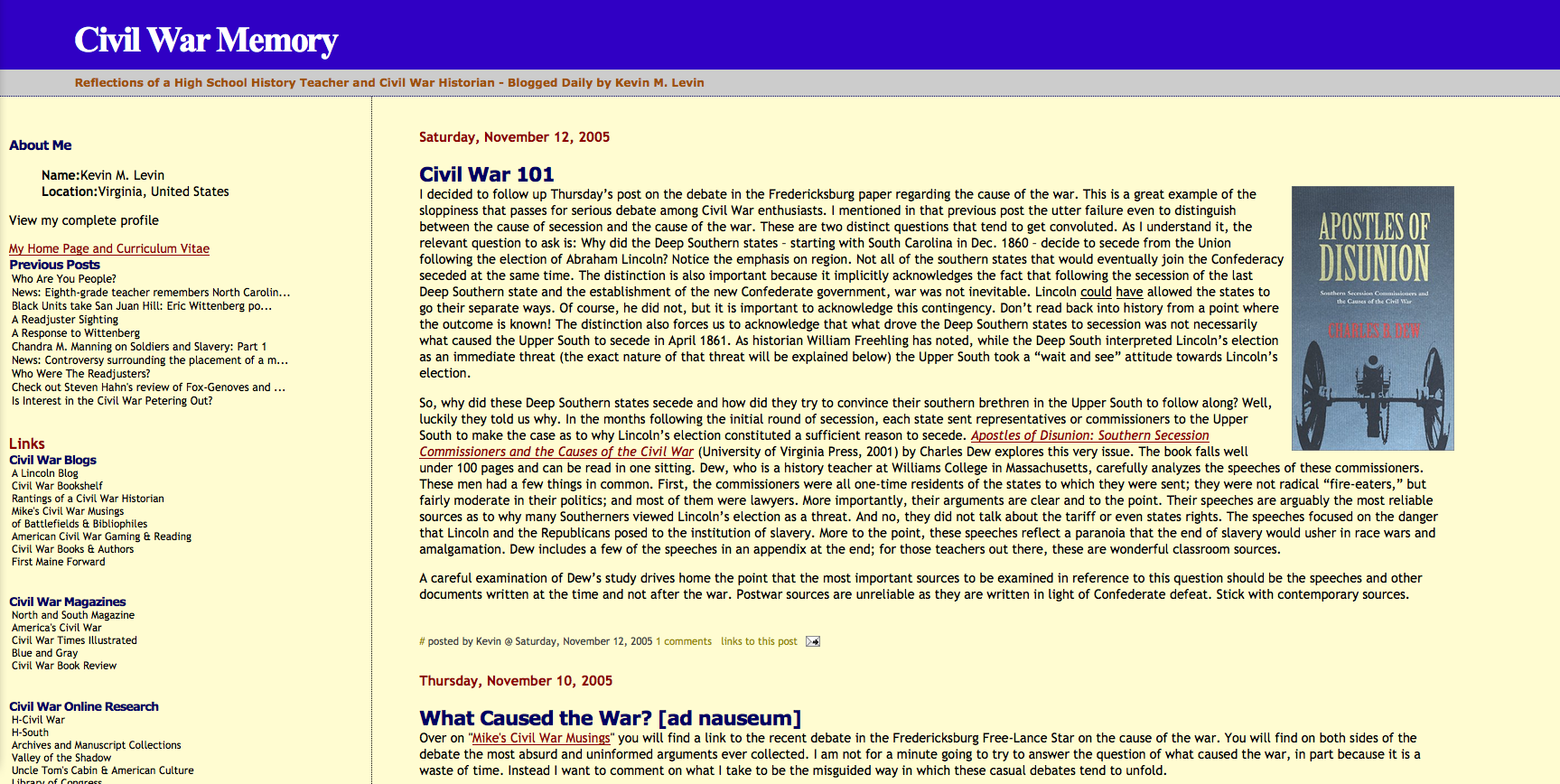 In 2005 there were just a few of us blogging the Civil War as you can see in the screenshot’s blogroll. Ten years later there isn’t enough time in the day to read them all. Many of them are incredibly thoughtful. It’s especially encouraging to see so many students at the undergraduate and graduate levels sharing their research on blogs. The debate over the place of social media in education and the historical profession has thankfully subsided. If I contributed even a tiny bit to its spread as a platform for historians and students of history than my time here was worth it.

Over the past ten years I wrote 3,800 posts that garnered over 55,000 comments from over 2 million unique visitors.

Numerous predictions of the demise of blogging have come and gone. Certainly, some of the conversations have moved to micro-blogging platforms like Facebook and Twitter, but there is still a place for a running journal that allows for the necessary space to collect one’s thoughts and the chance to interact with readers. I still enjoy the freedom to be as thorough or as brief as a I choose with my writing here. Blogging has come to occupy a specific space for me alongside publishing opportunities online and in traditional print.

I have no plans to stop writing. In fact, the ongoing controversy surrounding the public display of Confederate iconography is a reminder of the positive role that blogs and social media can play in creating space for intelligent discussion about such tough questions. When this blog does come to an end it is comforting to know that the content will remain as part of the permanent digital collections at the Library of Congress and at Gettysburg College’s Musselman Library.

As always, thanks to all of you – especially those of you who have been with me since the early years – for your continued support. Not everyone who drops by agrees with what I write, but every successful blogger begins with a visit… your visit.

Next post: Do We Need Another Biography of Custer?

Previous post: A Quick Word About Historiography and Popular History