“Does Any One Remember Negro Confederates?” 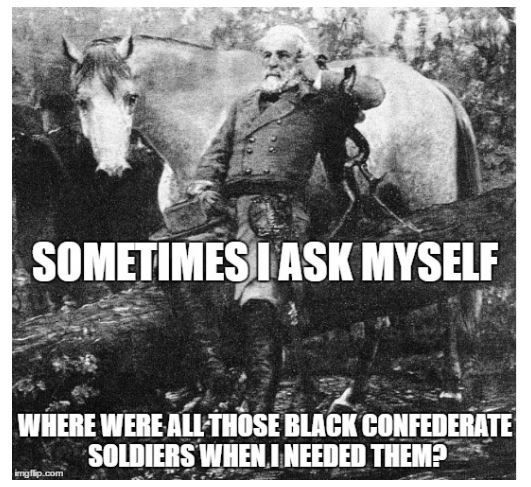 On a number of occasions over the past few years I have announced a cash award for anyone who can locate a piece of wartime evidence that points to the presence of black men fighting as soldiers in the Confederate army. I would love to find a letter or diary entry from a Confederate soldier or newspaper article that points to their presence in the army. I thought a cash award, along with the opportunity to humiliate me publicly, would be sufficient to inspire at least one reader.

As I was filing some documents earlier today I came across this little gem, which may help us better understand why no one has yet to claim the prize. It is a letter-to-the-editor that was published in The Times-Dispatch in March 1915 by a Confederate veteran from Sutherlin, Virginia.

The title, “Does Any One Remember Negro Confederates?”:

Sir,–Just fifty years ago to the very day, the writer remembers, Major James Pegram was drilling a “squad” of his negro soldiers on a vacant lot just above Henrico County Courthouse, lower Main Street. I was returning to the camp of the Third Howitzers from a brief “leave of absence,” and came unexpectedly upon the handsome and very attractive looking major and his new sort of Confederate soldiers. These latter looked well and were learning fast. On reaching camp the report I made to the “boys” caused a sensation, I can tell you. Just here I would like to enquire if there is one other survivor of those times who saw these Confederate negro soldiers at drill? Some weeks before I remembered hearing General W.C. Wickham make a fine speech in the Confederate Congress against the enlistment of the negroes. The old “war news” was held and still holds, the stage splendidly, but oh! the sadness of it now!

There is a good deal that can be unpacked from this brief source. Notice this veteran’s surprise at having come across black men drilling as soldiers in the streets of Richmond. His fellow soldiers back in camp were just as surprised by the news, which suggests that no one in camp had ever come into contact with a black soldier before this moment. One can surmise that neither the author or the men in camp had heard that the Confederate Congress finally passed legislation authorizing for the recruitment of black soldiers.

It would be interesting to know why this veteran took the opportunity to write in about this particular subject fifty years later. The letter at least suggests that witnessing black soldiers training as soldiers stood out from everything else that was experienced during the war and that it could not be easily forgotten.

So, black Confederate soldiers did exist and it is a fact that should not be denied. They existed for a few short weeks at the very end of the war. Understanding why they were not employed earlier opens up a window into the “Cornerstone of the Confederacy.”