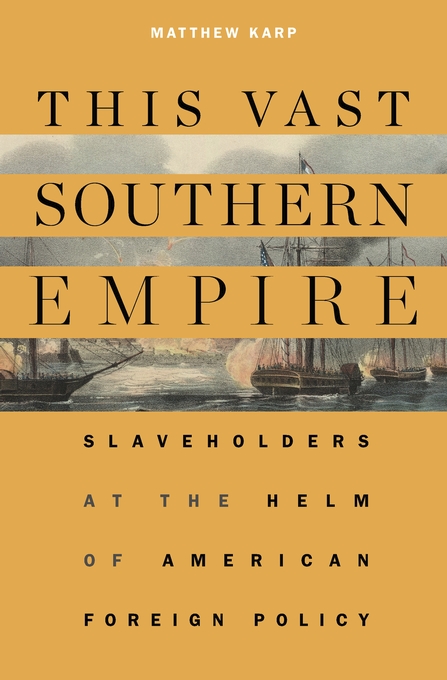 You need to pick up a copy of Matthew Karp’s new book, This Vast Southern Empire: Slaveholders at the Helm of American Foreign Policy, if you haven’t done so already. Karp explores the role that Southerners played in the three decades before the Civil War in shaping U.S. foreign policy. While many of the key players, including John C. Calhoun, Henry Wise, and Abel P. Upshur pushed for a small federal government, they expressed few qualms with flexing its military and diplomatic muscles in the interests of protecting slavery in the Western Hemisphere, following Britain’s ban on slavery throughout its empire in 1831.

I find Karp’s analysis of the annexation of Texas to be particularly interesting. In our survey classes we typically connect annexation with the growing national political divide between free and slave states, but we don’t connect it to the push to maintain its slaveholding interests on the world stage.

The annexation of Texas was perhaps the quintessential achievement of the foreign policy of slavery. The measure involved all the central aspects of that evolving program: feverish attention to the international balance between slavery and freedom; unquestioning belief in the power of the South to command American foreign policy, and the power of American foreign policy to command the world; and a willingness to bring the full weight of the U.S. government to bear on the question. Its realization brought despair to opponents of bondage on both sides of the Atlantic. “The annexation of Texas looks like one of those events which retard or retrograde the civilization of the ages,” wrote Ralph Waldo Emerson in Massachusetts. For the British historian T.B. Macaulay, America’s Texas diplomacy defined the essence of its role on the world stage: “The United States’ Government has openly declared itself the patron, the champion, and the upholder of slavery….[I]t renders itself illustrious as the evil genius of the African race.” American leaders “put themselves at the head of the slave interest, just as Queen Elizabeth put herself at the head of the Protestant interest in Europe.” Just Elizabeth’s victories against Spain were triumphs for world protestantism, so the American victory in Texas was a triumph of world slavery.

Southern slaveholders celebrated their accomplishment in similar international terms. The acquisition of Texas, crowed Henry Wise in Brazil, confirmed America’s “monopoly…of the cotton trade of the world.” The balance of power between Great Britain and the United States would never be the same, declared Major William Chase, commandant of the U.S. forces at Pensacola: “A British ministry declaring war against the United States could not remain in power more than forty-eight hours…. By the annexation of Texas the United States have secured the monopoly of growing the great staple of the world. (pp. 100-01)

It’s moments like this when I wish I was teaching my AP History class. The above passage beautifully encapsulates a mid-nineteenth century argument for American Exceptionalism, but it also anticipates America’s rise as an imperial power by the turn of the twentieth century. In fact, it throws a wrench into our tendency to ignore foreign policy for much of the nineteenth century other than the Monroe Doctrine.

Given the AP’s new emphasis on broad themes this is one place where you can give your students and edge and deepen their understanding of U.S. foreign policy and slavery.