When at Gettysburg Remember to Turn Around

Just returned from a short trip in which I accompanied a group of high school students from Brooklyn to Washington, D.C., Harpers Ferry, Antietam and Gettysburg. Thanks to Lisa Kapp – a longtime reader of this blog and a very talented history teacher – for asking me to come along as a guide. I had a wonderful time.

While at Gettysburg we met briefly with Peter Carmichael at the Virginia monument to discuss the Pickett-Pettigrew assault. Pete asked the students to think about the placement of the monument at such a prominent spot on the battlefield and whether it suggested in any way that Confederates lost this particular battle. He also asked them to reflect on the monument in light of the broader cause of the Confederacy and the consequences for African Americans had they been victorious. 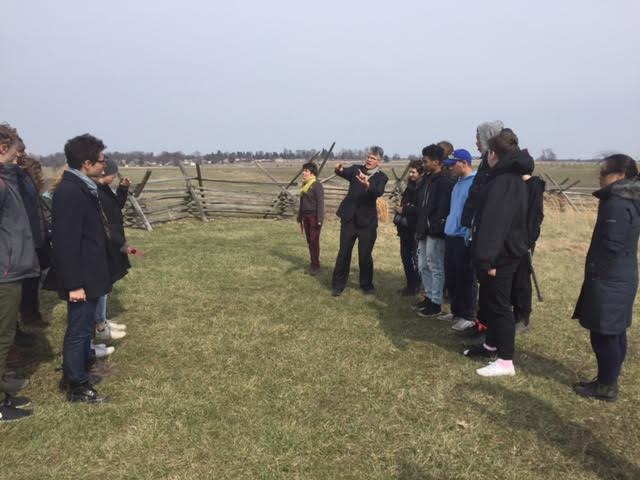 But it was a decision that Pete made at the end of the path where Virginians formed on the Spangler farm and which looks out on Cemetery Ridge. After describing the attack Pete asked the students to look behind them. He didn’t dwell on it too long, but he did make the crucial point that not all Confederates moved forward. Not all Confederates were brave in the face of the horror that awaited those who crossed the Emmittsburg Road. Some skulked and never formed up and others fell out along the way and made their way back.

There is just as interesting a discussion to be had in facing toward the rear as there is in facing forward, but on battlefields like Gettysburg, with its many monuments, that move is not so obvious. Our monuments encourage us to look forward. Think of the North Carolina monument at Gettysburg in addition to the Lee monument. They shape how we view the character of the men who fought in these battles. They were all brave. They were all clear-eyed about the cause for which they were ready to pay the ultimate sacrifice.

This trip has left me thinking about the many entry points on Civil War battlefields and at historic sites that can be used to encourage critical thinking. Pete demonstrated that by turning around on ground that encourages us to look forward we can uncover a whole new set of questions and stories.

Next post: Reserve Your Seat at the Civil War Institute Now

Previous post: When Your “Friends” Include Sons of Confederate Veterans