‘Robert E. Lee is Back and He is Pissed Off’

The image below is being used to announce and celebrate Confederate History Month. I have to admit that this image of stern-faced Lee wielding his sword and leading his men into battle strikes me as highly unusual given popular depictions of the Confederate general going back to the postwar years. I like to think that I have a pretty firm handle on visual culture surrounding Robert E. Lee. What stands out is how rarely you will find him in a battle pose of any sort following the war. He may be portrayed in uniform on monuments such as the one in Richmond, Virginia, but Lee is rarely (if ever) depicted with an unsheathed sword. In some cases it is difficult to discern any indication of Lee’s military leadership given the tendency to portray him as a man of peace and reconciliation. 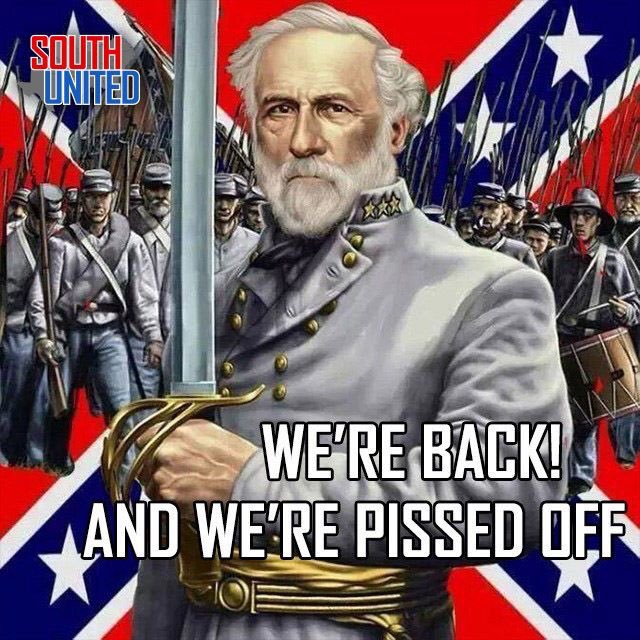 Lee is remembered as the soft-spoken gentleman warrior whose understanding of war was more in line with the past than with the scope and scale of violence of our modern civil war. He abhorred violence and only embraced a military role with the Confederacy after agonizing over the decision to resign from the U.S. military. Historians such as Gary Gallagher have challenged this popular narrative.

Images such as the one above usually feature the likes of Nathan Bedford Forrest and to a lesser extent Stonewall Jackson.

But this image raises the question of whether we are witnessing a shift in how Lee is depicted in popular culture. Has the increasingly defensive posture of Confederate heritage organizations such as the Sons of Confederate Veterans and Virginia Flaggers and deepening cultural and political rifts helped to shift our perception of Lee as some kind of modern warrior?