In the wake of the terrorist attacks on September 11, 2001 comparisons were routinely made with the Japanese attack at Pearl Harbor on December 7, 1941. Such  comparisons were made to place the scale of human loss in perspective as well as the surprise-nature of the attack itself. Both were acts of war. One of the victims on 2001 was my cousin, Alisha Levin.

Like many of you, I am trying to come to terms with the violence and loss of life resulting from the shootings in Las Vegas this past Sunday. As of today 59 people have lost their lives and over 500 are suffering from wounds of various severity. I keep coming back in my mind to regimental casualty counts from the Civil War. 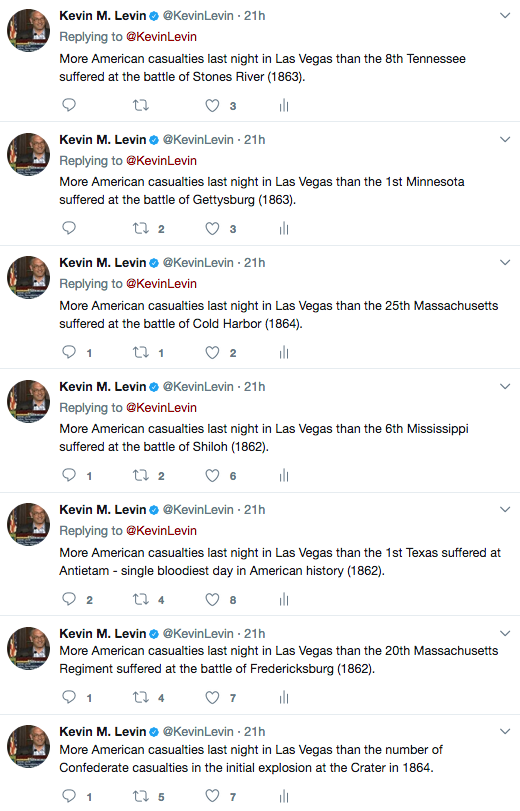 Not everyone was pleased with this series of tweets and as someone who has lost a loved one in a mass killing I completely understand, but here is what I can’t escape. A single gunmen managed to turn a peaceful concert into a scene of bloodshed that rivals some of the worst regimental losses from a single battle.

Many of us make sense of the scale of loss in the Civil War by focusing on its outcome. We argue that the death and destruction was meaningful, even necessary, because it resulted in a reunited nation and the end of slavery.

In comparison, we are scrambling to find some meaning in this most recent act of senseless violence. We focus on the acts of heroism of those in the crowd who protected and came to the aid of others. It would even help if we knew that the killer suffered from some type of psychological problem, but as of today we still have no answers.

What we are left with is just another act of mass violence involving weapons that have no place in society and a lingering sense that it is just a matter of time before it happens again.

Previous post: Ty Seidule Takes on Lee and the Lost Cause