I can’t think of a better way to recognize Confederate History Month than with a historical marker that acknowledges an important aspect of that history. Yesterday, on the 50th anniversary of the assassination of Dr. Martin Luther King Jr., the Calvary Episcopal Church, Rhodes College, and National Park Service unveiled a historical marker in Memphis describing Nathan Bedford Forrest’s role in the city’s slave trade. 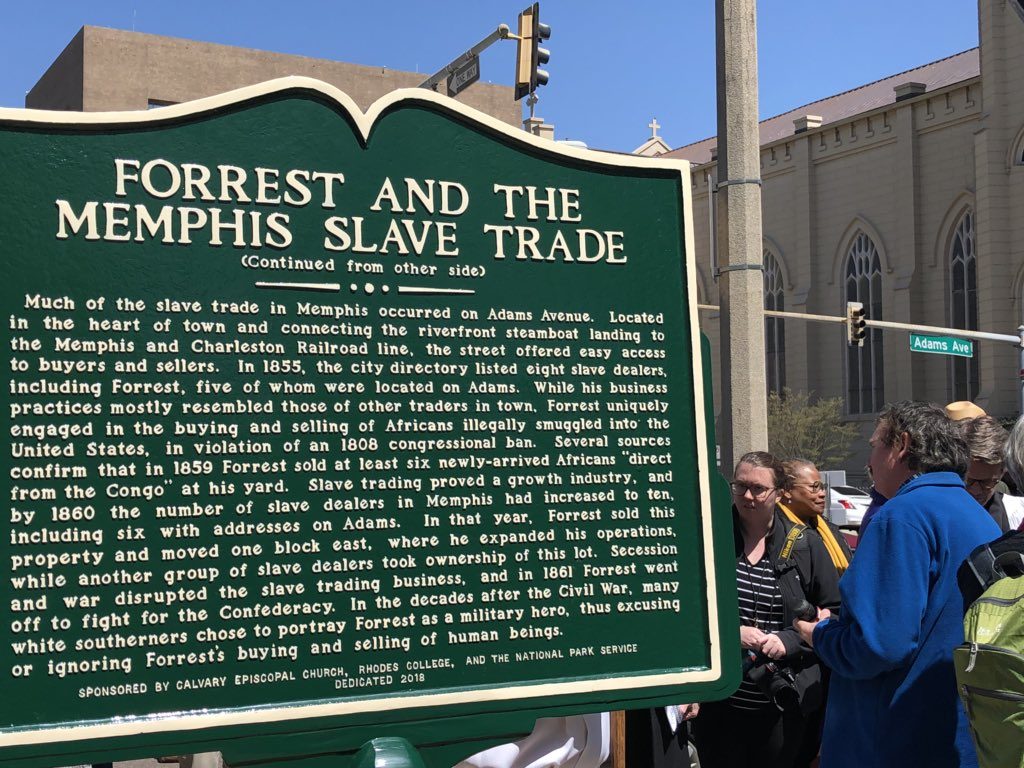 Here is a bit more from the marker text:

From 1854 to 1860, Nathan Bedford Forrest operated a profitable slave trading business at this site. In 1826, Tennessee had prohibited bringing enslaved people into the state for the purpose of selling them. As cotton and slavery grew in importance, the legislature repealed the ban in 1855. Starting that year, Memphis emerged as a regional hub for the slave trade. In addition to the more than 3,000 enslaved people who lived and worked in Memphis at the time, thousands more flowed into and out of the city, as traders and their agents brought a steady supply of human cargo into town via roads, river, and rail. In 1864, Forrest purchased this property on Adams, between Second and Third, just east of an alley behind Calvary Episcopal Church. Most slaves were sold at lots like this one before ending up on plantations in the Mississippi Delta or further south. Horatio Eden, sold from Forrest’s yard as a child, remembered the place as a ‘square stockade of high boards with two room Negro houses around. … We were all kept in these rooms, but when an auction was held or buyers came, we were brought out and paraded two or three around a circular brick wall in the center of the stockade. The buyers would stand nearby and inspect us as we went by, stop us, and examine us.’ …

The focus on Forrest’s involvement in the slave trade provides the foundation for understanding his role in the Civil War. Even if it is not explicitly acknowledged in the text it is clear why Forrest chose to fight for a government that was committed to protecting the right to trade, purchase, and own black bodies.
25 comments… add one

Next post: Camp Slaves Defend Their Honor at Fort Henry