In October 1973 EBONY magazine published a piece about Tuskegee, Alabama’s black mayor, Johnny Ford. The article highlighted the split among the community’s black citizens over Ford’s leadership and policy agenda as well as his support of  Governor George Wallace and Richard Nixon. Included in the article was an interview with Florida B. Segrist, who served as chairman of the Macon County Commission. 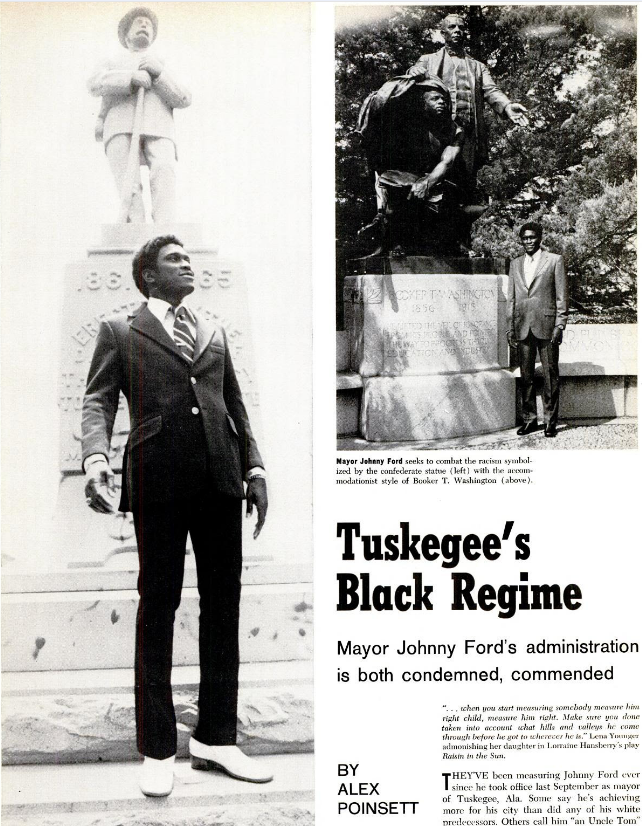 She offered the following observation on racial tensions in the community that centered, in part, on the local Confederate monument:

Easing into Tuskegee’s recent history, she recalls that it has been about 15 years since the downtown area was boycotted, that windows were broken and black paint smeared on the Confederate monument, mostly by students.

What Segrist failed to include is that these Tuskegee Institute students were protesting the acquittal of a white man for the murder of one of their fellow students.

‘The city cleaned that off,’ she says: ‘the next time, they got a little bit of red paint on it. We’re seeing if we can’t take off that, too. Of course, they don’t realize that we’re a peculiar town. We have two very beautiful monuments. The one of Booker T. Washington out at Tuskegee Institute is on private property. And the Confederate monument is on private property of the United Daughters of the Confederacy.’ Mrs. Segrist is proud to note that she is a member of the United Daughters. She is asked: ‘What would happen if the blacks in this community decided that the Confederate statue had to come down? How would that affect your sensibilities?’ She replies slowly, as if recovering from surprise: ‘If they felt that it had to come down, the first thing I would ask them is they realize it’s on private property. If they still thought it was a menace to the community, I don’t know what would be my reaction…when you attack the symbol of the history of a place, when [we] helped to have a school here whose main purpose was to build trades and to educate teacher for our black community, well…I think the committee that located Booker T. Washington had four white men on it and Negra and they searched for a man who could come here and that job. The white women in this town sold cakes to help raise the money to start that school. So I just can’t understand why they (blacks) would want to… Now I know there’re a few black here in the community that the statue is the symbol of something they don’t know anything about. But it’s part of the history of the South and I think when we are intelligent enough to accept the fact that, but for Southern planters, most blacks would still be in Africa. I think there needs to be a little appreciation of the Southern planter and the fact that he gave the ancestors of blacks in our country the opportunity to be American citizens. To me, to be an American citizen is the greatest honor that can come to a human being.’

This article received a good deal of feedback from readers, but Patricia Bailey, a 13-year old girl from Gary, Indiana responded directly to Segrist:

I am a student at Tolleston Junior High School. I am in the eighth grade and I am 13 years old. I am writing to correct some of the things Mrs. Florida B. Segrest said in an article, ‘Tuskegee’s Black Regime,’ in the October issue of EBONY. She said, “But it’s [a Confederate monument] part of the South and I think when we are intelligent enough to accept the fact that, but for Southern planters, most blacks would still be in Africa…’

Mrs. Segrist, what is wrong with black people being in Africa? It’s said to be the cradle of civilization, but we sometimes call it the ‘Dark Continent.’ Long before the slave traders went to Africa some black people were civilized. Some had empires and a very outstanding university (Timbuktu).

I think the statue of the Confederate solider should be taken down if the majority of the townspeople (80 percent are black) want it down. If I lived in Tuskegee, I could not stand the sight of something that would remind me of what the white man did to my ancestors.

I think you should take a course in black history or read up on Africa. Please don’t say something that you don’t know or understand.

There is something incredibly powerful about the way this 13-year old so handily undercut Segrist’s understanding of the historical context of the monument. According to Bailey, the monument is not a symbol of white paternalism toward African Americans and of peaceful race relations, but a constant reminder of the history of slavery, racism, and injustice.

In many ways, Bailey’s letter-to-the-editor anticipates the broad contours of our current debate about Confederate monuments. It starts with what is taught in history classes, but it is ultimately about how we remember and commemorate our past and whether these monuments represent our collective values.

Next post: The White Supremacist Roots of Confederate Monuments