The contextualization of Confederate monuments can take many forms. For public historians the preferred method is the addition of historical markers that help visitors better understand the individuals/organizations responsible for the monument and time in which it was dedicated. The goal here is education and often an unstated assumption that their placement will somehow defuse the controversy. For activists whose goals are ultimately the removal of Confederate monuments context is often performative. It acknowledges some important aspect of the history of the monument even as it reflects the goals of the activist[s].

Last year UNC-Chapel Hill student Maya Little mixed her own blood with red paint before it was applied to the Silent Sam statue on campus. When asked to explain why she did it, Little responded that the statue lacked proper context. Little was, of course, referring to the 1913 dedication speech delivered by Julian Carr in which he recalled having “horse-whipped a negro wench until her skirts hung in shreds.”

Today it was reported that Ku Klux Klan hoods were added to the mother and son figures that make up the Monument to North Carolina Women of the Confederacy located just outside the State House in Raleigh. 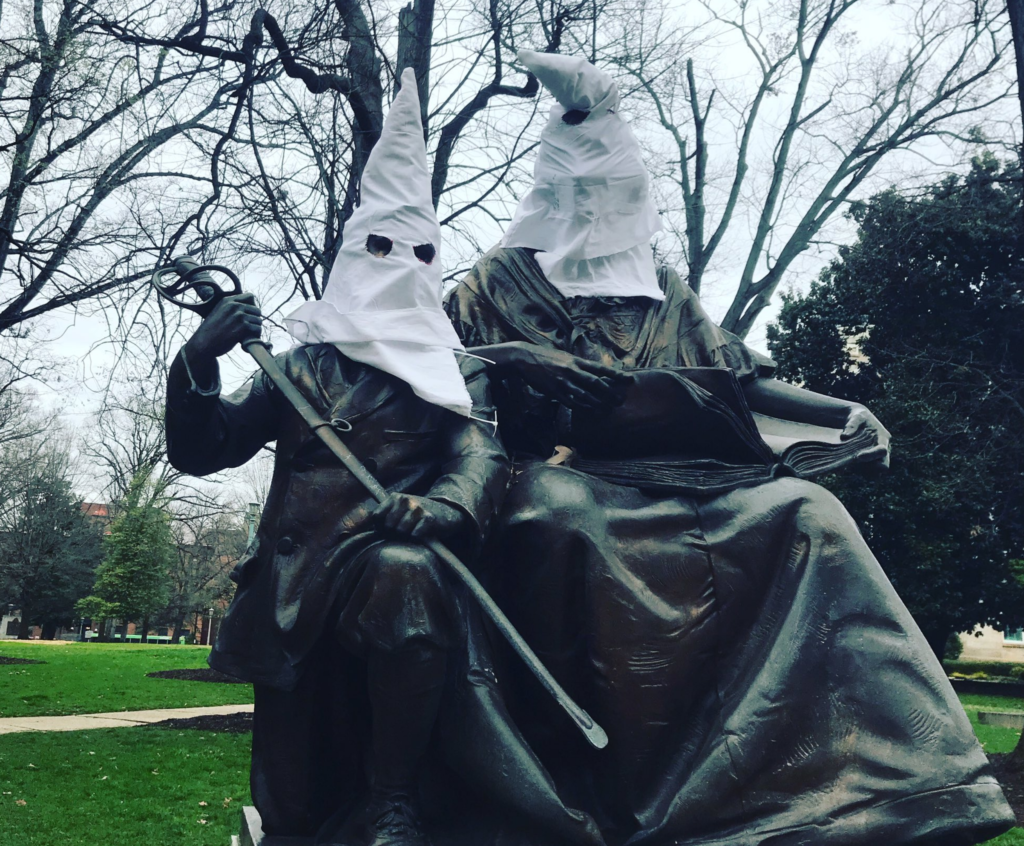 The dedication of this particular monument took place one year after Silent Sam and just prior to the release of Birth of a Nation and the rebirth of the Ku Klux Klan at Stone Mountain, Georgia in 1915.

Governor Locke Craig’s dedication address on June 10, 1914 was an unapologetic celebration of the “onward march of the [white] race.”

Armies may be destroyed, ‘Far called our navies melt away’; yet from a land consecrated by the blood of the brave, from a soil enriched by glorious tradition, tried and purified by fire, a nobler, stronger race will come….

The heroic past is our priceless inheritance. Our armies were destroyed; our land was smitten by war; our homes were ravaged by avenging armies. We were plundered by the hordes of reconstruction. But standing in this land that has suffered, amid this throng of gray-haired veterans, and their kindred and descendants, I declare that the legacy of the war is our richest possession.

Covering the faces depicted in this monument with Klan hoods brings us right back to a truth that would have been readily acknowledged by anyone standing in the crowd on that June day.