We’ve Lost One of the Giants of Civil War History 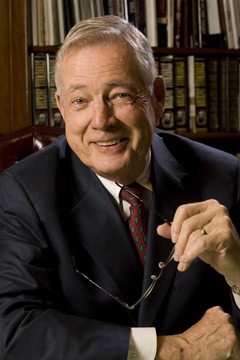 Like many of you out there I am sad to hear of the passing of Dr. James I. Robertson. He enjoyed a long and respectable career at Virginia Tech and touched many people with his passion for Civil War history in the classroom, on the radio, and on countless battlefield tours.

One of the first Civil War books I ever read was his biography of Stonewall Jackson. I was so impressed with the book at the time that I made it a point to meet him at a book signing at the Manassas battlefield.

In 2012 I was honored to have an essay of mine included in the Virginia at War series that he co-edited with William C. Davis.

I still love his response in this short video clip in which he is shown the Virginia textbook that included the claim that thousands of black men fought as soldiers with Jackson in 1862.

RIP, Dr. Robertson and thank you for enriching my understanding of American history.

Next post: Was Robert Gould Shaw a Peeping Tom?