Thanks once again to Terry Johnston at The Civil War Monitor magazine for inviting me to share some of my favorite Civil War books of the past year. It goes without saying that this is never easy. I could have easily chosen any of the books selected by the other contributors. 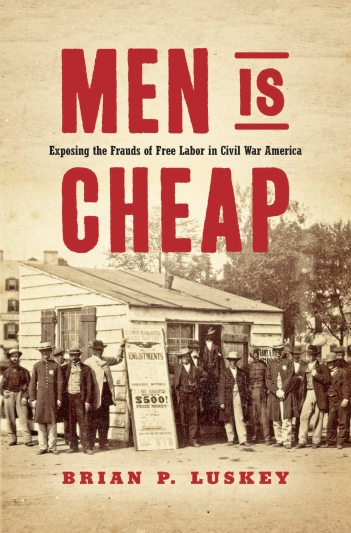 Top Pick: This was a great year for Civil War books, and Brian Luskey’s Men Is Cheap: Exposing the Frauds of Free Labor in Civil War America (University of North Carolina Press) stands out as one of the best. Luskey explores the underside of the wartime North’s free labor system. While many argued that wage labor made men free and ultimately contributed to Union victory, it also, according to Luskey, exposed many instances in which capital and labor were in conflict. Men Is Cheap tells the story of northern businessmen, military officers, employment agencies, and other middlemen who mobilized and often took advantage of vulnerable populations such as Irish immigrants, emancipated slaves, and even Confederate deserters. Brokers assisted drafted men in securing substitutes and in the process scammed people out of thousands of dollars in bounties. Soldiers like New Yorker Henry Walker fought to destroy the slaveholding class, but soon found himself considering the possibility of sending a freed slave home to alleviate the family’s economic troubles. Luskey demonstrates that a strong ideological commitment to Union on the part of northern entrepreneurs also encouraged a level of personal ambition that often resulted in the exploitation of others. The final chapter explores the role that the Freedmen’s Bureau played in helping emancipated slaves and former soldiers find work, which Luskey contends fueled a middle-class backlash that led to the end of Radical Reconstruction in the South. It’s hard to do justice to this book here. Do yourself a favor and read it.

Honorable Mention: For some decades now, historians have written extensively about the role of slavery in the formation and maintenance of the Confederacy. With Colossal Ambitions: Confederate Planning for a Post-Civil War World (University of Virginia Press), Adrian Brettle peels back layers of Lost Cause mythology to explore how Confederates imagined an independent slaveholding republic in a global context. Far from simply defending the institution of slavery, Brettle says, Confederates envisioned the expansion of their slaveholding republic throughout the western hemisphere. The author shows how military setbacks altered this postwar imperialist vision, but even late in the war, Confederates maintained that the institution of slavery was a strength and planters continued to anticipate a time when they might contribute to global prosperity. Ultimately, Colossal Ambitions is an important reminder of just what was at stake in this war.

Looking Forward To: Having read Thavolia Glymph’s book Out of the House of Bondage (Cambridge University Press, 2008), which exposes the use of violence by elite slaveholding women against enslaved women, I am very much looking forward to her latest, The Women’s War: The Civil War’s Battles for Home, Freedom, and Nation (University of North Carolina Press, 2020), a comprehensive history of women in the Civil War era. Brian Matthew Jordan is a masterful storyteller, and his forthcoming study of the 107th Ohio Infantry, A Thousand May Fall: Life, Death, and Survival in the Union Army (Liveright, 2021), is bound to expand our understanding of the soldiers’ experience in a regiment made up mostly of ethnic Germans, whose loyalty to the nation was routinely challenged and whose bravery was rarely acknowledged.

Feel free to share your favorite Civil War books of 2020 in the comments below.

Next post: Robert E. Lee Takes Another Hit in Virginia