Remembering the Battle of the Crater: War as Murder 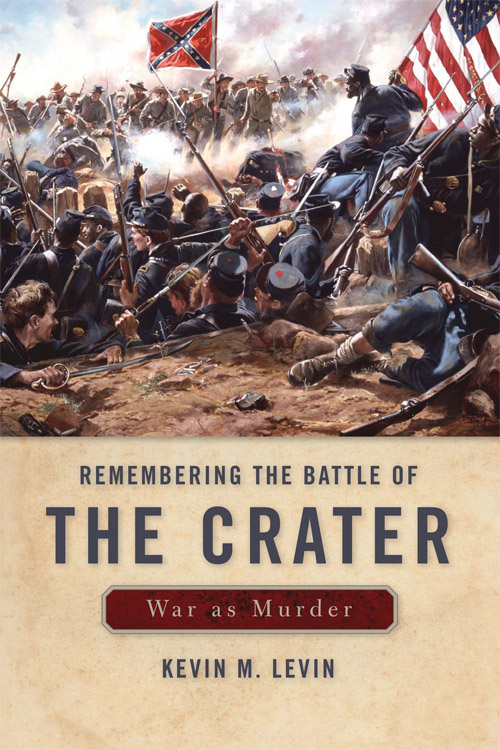 The battle of the Crater is known as one of the Civil War’s bloodiest struggles — a Union loss with combined casualties of 5,000, many of whom were members of the United States Colored Troops (USCT) under Union Brigadier General Edward Ferrero. The battle was a violent clash of forces as Confederate soldiers fought for the first time against African American soldiers. After the Union lost the battle, these black soldiers were captured and subject both to extensive abuse and the threat of being returned to slavery in the South. Yet, despite their heroism and sacrifice, these men are often overlooked in public memory of the war.

Levin offers something new and valuable in this book. His approach of unpacking the complex telling and forgetting of the events surrounding one battle allows him a focus and specificity that even many very good treatments of historical memory often lack. Remembering the Battle of the Crater stands to make a real and lasting contribution to the field of Civil War memory studies. — David W. Blight, author of American Oracle: The Civil War in the Civil Rights Era

Levin offers something new and valuable in this book. His approach of unpacking the complex telling and forgetting of the events surrounding one battle allows him a focus and specificity that even many very good treatments of historical memory often lack. Remembering the Battle of the Crater stands to make a real and lasting contribution to the field of Civil War memory studies. — Anne Marshall, author of Creating a Confederate Kentucky: The Lost Cause and Civil War Memory in a Border State

[ Remembering The Battle of the Crater] centers on the well documented ‘massacre’ of the United States Colored Troops by Confederate soldiers during and after the battle, carrying the story on through the eras of the Lost Cause, Virginia’s Reconstruction and Readjuster Movement. Levin’s work offers a refreshing and inquisitive look at the battle and how the role of the USCT’s is now coming into light in subsequent preservation and interpretation efforts. — Chris Calkins, Former Chief of Interpretation/Historian (Ret.), Petersburg National Battlefield

This is an important study of memory, race, and the Battle of the Crater. Levin traces the troubled story of how the Mine Attack at Petersburg was remembered by survivors and contemporary generations alike, and he makes clear and frank judgments about the tortured ways in which Americans have dealt with, or avoided, key racial aspects of the battle. Levin offers significant and convincing insights as he sheds light on our understanding of historical memory. — Earl J. Hess, author of Into the Crater — The Mine Attack at Petersburg

Remembering the Battle of the Crater is a well-researched and well-written book. Civil War buffs should find it to be an especially interesting read — one of the many important new studies that are being published to celebrate the sesquicentennial of the conflict. — Journal of America’s Military Past

On the whole, Levin has produced a thoroughly researched and carefully argued study… The result is a solid academic book that firmly establishes Levin as an important scholar and public voice on the Civil War, race, and memory.”– Journal of American History

Levin, known to many historians for his acclaimed blog Civil War Memory, deftly explores the role of race in this battle for memory. — Journal of Southern History

Levin nonetheless reinforces the idea that how human beings remember warfare is just as important as the battles themselves. — Journal of Military History

[Levin’s] straightforward, non-opinionated style is refreshing. Overall, it is a well written book. I highly recommend this book for its unique content and welcome its divergent opinion. — Civil War News