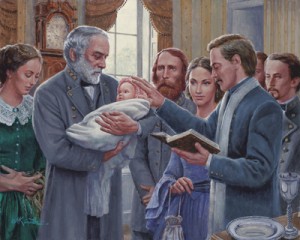 Few things bother me more than watching people get their kicks off of some aspect of the Civil War. It is difficult to define my frustration, so let me share a few anecdotes. I’ve seen it at Civil War Roundtables whose audiences hope for nothing more than the same tired stories about the same short list of characters. It’s that little chuckle in the audience after the presenter strikes some sentimental chord that irks me. I see it in casual discussions when the person finds out I teach a class on the Civil War and says: “Let me share a story your students will love.” And yes you can see it in the coffee mugs, t-shirts, towels, and bumper stickers. What bothers me is the casualness of it all. There is a lack of seriousness that functions to keep the individual from truly grasping the tragedy and horror of the event. I blame in part the Lost Cause interpretation for creating this child-like mentality. Lost Cause advocates, in reinterpreting the end of the war from one of defeat to a valiant stand in the face of overwhelming numbers and an industrial North, turned the war into a fictional story with a sharp dichotomy between heroes and villians. We could also throw in the general drive towards reunion during the postwar years, which had the effect of distancing Americans from any chance of dealing with the difficulties of race. So, by 1900 we have Robert E. Lee, “Stonewall” Jackson and a sanitized image of the common soldier. Throw in a little Gone With the Wind and you’ve got yourself a real tear jerker. One sometimes gets the impression that people are happy there was a war so we could have this story to embrace.

The long-term consequences are the movies Gettysburg and Gods and Generals. Of all the possible moral lessons that a Civil War movie could address, the best Gettysburg could do is place James Longstreet on the moral high ground owing to his firm conviction that the July 3 charge was doomed from the beginning. Their relative positive reception in Civil War circles reflects a continued love affair with entertainment at the expense of more serious reflection. Both movies were more an exercise in cliches than any attempt to tackle history. I sometimes show pieces of Gods and Generals to my Civil War class and it never fails to garner a great deal of laughter. I have actually had students ask if this is a comedy.

In an essay which analyzed the primacy of political factors in understanding the cause of the war, the late historian William Gienapp had this to say: “However much social and economic developments fueled the sectional conflict, the coming of the Civil War must be explained ultimately in political terms, for the outbreak of war in April 1861 represented the complete breakdown of the American political system. As such, the Civil War constituted the greatest single failure of American democracy.” The operative word in this passage is “failure.” The Civil War was an absolute failure of our democracy. I sometimes wish more people would approach the study of the war from this perspective. When it comes to the Civil War there is very little to celebrate or feel good about.

In the Introduction to his book Apostles of Disunion Charles Dew describes on the one hand the feeling of growing up in the South with a casual though profound respect for “Lee’s valiant men, who fought so hard and so long before finally yielding to overwhelming numbers.” As a serious scholar of the 19th century South Dew confronts his boyhood by noting how disappointed he was to discover the role that slavery and race played in his study of the secessionist commissioners. From the introduction:

“All this is a roundabout introduction to a point I wish to make at the outset: despite my scholarly training and years spent trying to practice the historian’s craft, I found this in many ways a difficult and painful book to write. Even though I am far removed–both in time and attitude–from my boyhood dreaming about Confederate glory, I am still hit with a profound sadness when I read over the material on which this study is based.”

I think Dew is on to something quite interesting. For many casual Civil War enthusiasts the study of the Civil War is simply a fascination with “boyhood dreams.” Perhaps Faulkner was right on target when he argued that for every young southern boy every day is July 3. I am suggesting that this is a dangerous stance to take in regard to the Civil War. To the extent that we remain satisfied with attractive stories that simply color the past is the extent to which we fail to acknowledge the deep problems that the Civil War uncovered and in certain respects left unresolved.