Was Gettysburg the Turning Point of the War? – Part 4 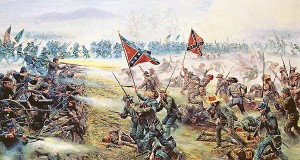 Read Parts One, Two, and Three

We can think of the events between 1861 and 1865 as a series of facts. In analyzing these facts historians will pick out those that stand in certain relations with one another. The most common relation in historical studies is that of cause and effect. Historians have offered a number of explanations to such questions as why the Civil War occurred and why, in the end, the Confederacy did not secure its independence. Though historians disagree over the answers to these questions, it is still reasonable to suggest that in principle there was a reason or set of facts that explains why the Civil War occurred and why the Confederacy lost in April 1865. What is important here is that the cause is itself a fact that can be discerned through historical investigation as a short in the wiring of a building could be a causal fact that might explain why a fire took place. In short, causal facts are part of the objective side of history; they are part of the historical past that the historian is attempting to explain.

Not all judgments are part of the objective side of history. For example, the conclusion that General Richard S. Ewell acted incompetently in not securing Culp’s Hill at the end of the first day at Gettysburg is a subjective judgment based on an evaluation of the available evidence. What makes this judgment subjective is that agreement or disagreement with this conclusion does not necessarily follow from some final fact. Even if historians agree on the relevant facts, no one conclusion surrounding Ewell’s competence as a commander necessarily follows.

Judgments surrounding turning points should be seen along these lines. Even if all of the facts between 1861 and 1865 are known, no one conclusion regarding which event(s) constitutes the turning point necessarily follows. And the reason is simple: Historians employ assumptions in making these decisions that are themselves subjective.

Historians employ an array of assumptions concerning when large-scale conflicts such as wars are decided. They may be drawn to events in the early stages or hold back until close to the end. This may be the difference between interpreting Antietam and its political consequences and Lee’s retreat from Petersburg as the turning point of the war. Such decisions may be based on judgments surrounding Lee’s ability or inability to pose a threat of any kind to Union offensives at various times. It is also conceivable that the turning point occurred at the firing on Fort Sumter in April 1861 assuming as Shelby Foote has that the South never “had a chance to win that war.”

Other assumptions include the relative importance historians have assigned to events in the Eastern as opposed to the Western Theater. Both Richard McMurry and Thomas Connelly have challenged what they judge to be an inordinate amount of attention paid to military operations in the east. According to McMurry “the war was won or lost” in the west. Historians have elevated in importance such battles as Chattanooga and its vital rail links, Pea Ridge and Wilson’s Creek, which resulted in Union control over the slave state of Missouri and which Lincoln believed was necessarily to hold if the Union was to continue and more notable events such as the battles of Vicksburg, Perryville and Atlanta.

Gary Gallagher has argued that the Eastern Theater was psychologically more important for both North and South than the West. Northern leaders, including Lincoln, Senator Charles Sumner and Secretary of War Edwin Stanton believed Lee provided the greatest obstacle to Union victory. Lincoln visited the Army of the Potomac on more than one occasion, but never inspected Union armies in the west. Southerners, even in the Deep South, according to Gallagher, acknowledged Lee’s army as constituting their best chance for attaining their freedom. Lee’s victories provided a rallying point which carried the Confederacy “beyond the point at which its citizens otherwise would have abandoned their quest for nationhood.”

Previous post: Was Gettysburg the Turning Point of the War? – Part 3