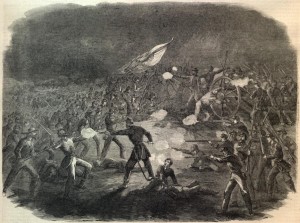 Over the past fifteen years historians have focused a great deal of attention on the formation and endurance of this nation’s pantheon of Civil War military heroes. Much of this work has concentrated on the influence of the Lost Cause and the work of other veterans in solidifying their place in history in the first few decades following the war. Interestingly, Chamberlain’s importance presents a counterexample to the process by which most other Civil War generals developed into icons. Chamberlain’s reputation is a recent phenomenon, a result of Michael Shaara’s popular novel, The Killer Angels, Ken Burns’s PBS documentary, The Civil War, and the Hollywood movie, Gettysburg. Though Chamberlain disappeared from the historical landscape for much of the twentieth century, it was not for a lack of effort on his part to preserve his reputation for future generations. Though the attention lavished on Chamberlain in recent years may have some people in the Civil War community wondering if it is deserved, the publication of his postwar letters presents an opportunity to explore the difficulties involved in adjusting to peacetime, the continued importance of veteran’s communities in maintaining a sense of identity, and the continuing need to remember the war.

Chamberlain’s postwar letters cover nearly every aspect of his personal and professional life, including his four terms as governor of Maine, his service as president of Bowdoin College, numerous business enterprises, and most importantly, his career as a writer and lecturer on his Civil War experiences. Jeremiah Goulka prefaces these letters with a thorough overview of Chamberlain’s life and the important postwar themes covered in the letters. His letters to his family and especially those to his wife Fanny, betray a loving husband though at times removed due to his many commitments. Living in Portland in 1903 and just two years before the death of his wife who was suffering with blindness, Chamberlain wrote promising to spend more time with her but noted that his demands “leave me scarcely an hour to keep my own mind properly fitted for the work I have to do.” (197).

Much of his “work” centered around lectures and writings on his involvement in such notable battles as Gettysburg and his role in the final surrender at Appomattox Court House. One of the common criticisms leveled at Chamberlain revolves around the claim that he inflated his role at Little Round Top in an attempt to horde the glory of that important engagement. At least one letter included in this volume refutes this criticism. In a January 1910 letter to Union veteran and author Oliver W. Norton, Chamberlain says of his brigade commander, Strong Vincent, “He was a noble man, and I have not known an abler commander in his grade. Nothing could exceed his skill and energy in taking the position on Little Round Top and the confidence he inspired in his subordinates. To this the result of the fight on the left at Round Top is very largely due.” (242-43) The correspondence also clarifies an often incorrectly reported fact that Chamberlain attended the July 1913 fiftieth anniversary reunion at Gettysburg.
Though Chamberlain is often thought of as a point of reconciliation, his own words belie these claims. As early as April 1866 Chamberlain wrote that “we should be slow to trust those who have been disloyal to the country, and that we should do justice to those who stood by her in the hour of danger and trial.” (16) The only omission in this book is the lack of commentary concerning Chamberlain’s role during the surrender at Appomattox Court House. The historian William Marvel has recently argued that the famous salute between Chamberlain and John B. Gordon probably did not take place. Goulka could have connected the letters between Gordon and Chamberlain with the latter’s additional references to national reconciliation as an explanation for the story’s emergence so close to the turn of the century.

Jeremiah Goulka should be commended for his work in bringing together Chamberlain’s postwar correspondence. His words serve as a reminder that the experience of war remained with the veterans long after the guns fell silent.