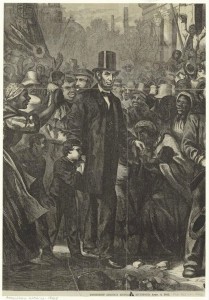 On this day 143 years ago the Emancipation Proclamation went into effect thus changing the overall goal of the war effort and its meaning. Over at Anti-Neo-Confederate, Edward Sebesto has posted some interesting thoughts on the significance of the proclamation. I particularly enjoyed his musings regarding how the EP has fared in historical memory:

In American historical memory we tend to see emancipation in very narrow terms, of African Americans receiving freedom, rather than America itself being freed from slavery and the system of slavery and America being freed from a dreadful bargain of the writers of the Constitution. The abolition of slavery in the United States and its legal basis is an accomplishment to be celebrated by all Americans. I believe that the ghettoization of the emancipation proclamation is a result of America’s accomodation of the “Gone With The Wind” view of the Civil War.

This notion of the African Americans “receiving freedom” has been challenged in recent years by historians who emphasize the steps the slaves themselves took from the beginning of the war to gain their freedom. The thousands of contrabands flooding Union camps forced the commanders on the ground and policy makers in Washington to figure out what to do. This bottom-up perspective or view from the ground uncovers what can be interpreted as political behavior, which ultimately led not just to the EP, but to the recruitment of close to 200,000 USCT. I tend to take a long view of the Civil Rights Movement not starting in the 1950’s, but beginning during the Civil War itself. For me it clarifies and serves as a reminder that as much as slavery and discrimination limited the lives of African Americans they were never entirely without volition or more importantly, their humanity. In the end, the story of the EP and eventual abolition of slavery is the centerpiece of the story of American freedom.

It is important that we be reminded of the importance of the Proclamation and take pride in it and the subsequent abolition of slavery throughout the country. I suspect that the reason we do not focus our attention on it is because it serves as a reminder of a dark past that we still do not know how to deal adequately with. Americans prefer their overly simplistic and progressive view of the past. As to Sebesta’s “Gone With the Wind” reference, if he is suggesting that what most Americans think about when it comes to the Civil War is a complacent slave population that was satisfied with bondage than he is correct. We would rather remember the watered down “Lost Cause” imagery of brave soldiers, daring flank attacks, and the gallant Lee and Jackson. Slavery and race muddy the waters. More importantly, it serves as a reminder that as much as white Americans claimed to be fighting for their freedom or preserving democracy there were hundreds of thousands who lived in bondage. It is their struggle that defined the war and to a certain extent shaped the ideals that make this country what it is.