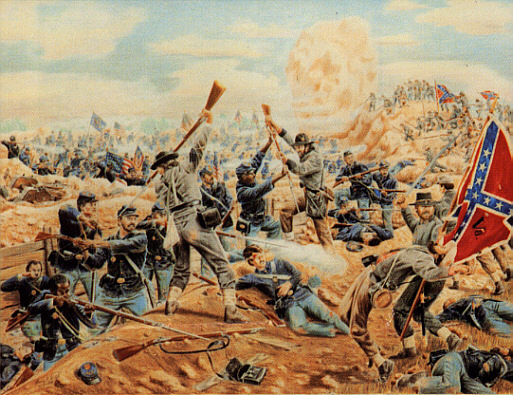 I received my author’s copies of the most recent issue of the magazine, America’s Civil War. This issue includes my article titled, “The Earth Seemed To Tremble,” (May 2006, pp. 22-28) which examines how Confederate soldiers reacted to the presence of United States Colored Troops and how they assessed the battle within the broader context of the progress of the war in the summer of 1864. I conclude that despite the fact that traditional histories of the Petersburg campaign tend to portray Confederate prospects for victory as dim, a close examination of wartime sources suggests that the men in the ranks remained optimistic. Most importantly, the presence of black soldiers served as a reminder of exactly what was at stake if their bid for independence failed.

This article provides a brief overview of the first chapter of my Crater manuscript. I am not interested in providing a detailed account of the battle as others have done a better job. The focus is on how soldiers perceived the progress of the war both leading up to and through the battle of the Crater. Such a focus provides a base for later chapters which analyze various themes in the commemoration and memory of the battle.

In addition to my article there are two excellent pieces by Timothy B. Smith and Peter Carmichael. Feel free to offer critical comments.

Next post: Checking In With Our Friendly Confederate Reenactor