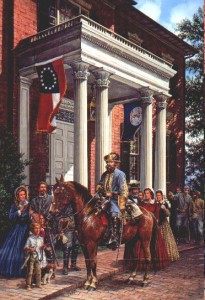 I decided to follow up yesterday’s depressing news story out of Mississippi involving Claude Tubberville and his inane assertions about the Civil War. What follows is a sample of the kinds of evidence that James McPherson uses in his article, “Long-Legged Yankee Lies: The Southern Textbook Crusade” which appeared in an edited collection titled, The Memory of the Civil War in American Culture edited by Alice Fahs and Joan Waugh. David Woodbury is rightfully disturbed over at of Battlefields and Bibliophiles regarding Tubervilles claims of “educating” school children and I urge you to read his reaction. As a teacher I can add very little to his thoughts.

By the 1890’s organizations such as the United Confederate Veterans (UCV) and the United Daughters of the Confederacy (UDC) had organized committees to oversee and review the content of textbooks for children in schools across the South. As one UCV committee report noted, the purpose of such reviews was to honor the sacrifice of the Confederate soldier and “to retain from the wreck in which their constitutional views, their domestic institutions, the mass of their property, and the lives of their bravest were lost, the knowledge that their conduct was honorable throughout, and that their submission at last . . . in no way blackened their motives or established the wrong of the cause for which they fought.” (p. 68)

Consider Susan Pendleton Lee’s 1895 text, A School History of the United States, in which she declared that although abolitionists had declared slavery to be a “moral wrong” most Southerners believed that “the evils connected with it were less than those of any other system of labor. Hundreds of thousands of African savages had been Christianized under its influence—The kindest relations existed between the slaves and their owners. . [The slaves] were better off than any other menial class in the world.” No surprise that in her account of Reconstruction the Klan was necessary “for protection against . . . outrages committed by misguided negroes.” (p. 69)

By the first decade of the twentieth century most Southern states had created textbook commissions to oversee or prescribe books for all public schools that provide a “fair and impartial” interpretation. These committees worked diligently to challenge publishers who stood to threaten the South’s preferred story of the war: “Southern schools and Southern teachers have prepared books which Southern children may read without insult or traduction of their fathers. Printing presses all over the Southland—and all over the Northland—are sending forth by thousands ones which tell the true character of the heroic struggle. The influence . . . of the South forbid[s] longer the perversion of truth and falsification of history.” (p. 70)

Perhaps the best example of the oversight by the UDC was through the work of “historian general” Mildred L. Rutherford of Georgia. In 1919 Rutherford published A Measuring Rod to Test Text Books and Reference Books in Schools, Colleges, and Libraries. The UCV historical committee recommended the book for “all authorities charged with the selection of text-books for colleges, schools, and all scholastic institutions” and recommended that “all library authorities in the southern States” to “mark all books in their collections which do not come up to the same measure, on the title page thereof, ‘Unjust to the South.’

Here are some of Rutherford’s recommendations:

Reject a book that speaks of the Constitution other than [as] a compact between Sovereign states.Reject a text-book that . . . does not clearly outline the interferences with the rights guaranteed to the South by the Constitution, and which caused secession.

Reject a text-book that omits to tell of the South’s heroes and their deeds. (p. 72)

Here are corrections to common mistakes found in textbooks:

“Southern men were anxious for the slaves to be free. They were studying earnestly the problem of freedom, when Northern fanatical Abolitionists took matters into their own hands.“More slaveholders and sons of slaveholders fought for the Union than for the Confederacy (this fit awkwardly with assertions elsewhere that the Yankees got immigrants and blacks to do most of their fighting – McPherson comment).
“Gen. Lee freed his slaves before the war began and Gen. Ulysses S. Grand did not free his until the war ended.

The war did not begin with the firing on Fort Sumter. It began when Lincoln ordered 2,400 men and 285 guns to the defense of Sumter.”
Union forces outnumbered Confederate forces five to one, not surprising when the Union population was 31 million while the Confederate population was only 5 million whites and 4 million slaves.” (p. 73)

And there you have it. I wonder if Rutherford and the rest of the gang had any idea of just how successful they were in shaping an interpretation that continues to prove to be attractive throughout this country.

Next post: David Eicher’s Confederacy or Why Can’t We All Just Get Along?

Previous post: Checking In With Our Friendly Confederate Reenactor