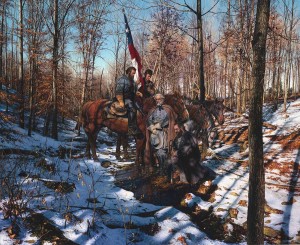 I just received my new issue of North and South Magazine and it looks to be another excellent read. That said, I have to admit to laughing as I noticed a new painting by John Paul Strain on the first page. The painting is titled, “Battlefield Prayer” and the setting is Hamilton’s Crossing – December 12, 1862; it depicts Lee, Jackson, and Stuart (though he looks more like Longstreet to me) praying. Here is an excerpt from the description:

With the sounds of battle preparation echoing through the woodland hills and valleys, the three generals paused a moment to rest from their morning ride and water their horses. Stonewall Jackson knelt before the Lord and the men prayed for the Lord’s blessing and guidance to help them with their great task. Many men would turn to their God before battle, if not for themselves, then for the families. The Almighty would hear thousands of battlefield prayers that day.

Now please don’t get me wrong, I am in no way criticizing Strain’s artistic abilities. I have yet to move beyond stick figures and have a deep respect for anyone who can bring a scene to life. However, what exactly is the purpose of this painting. Of course I know that all three men subscribed to some form of religion, but it is unclear to me why this particular scene needs to be painted. Who exactly buys a painting like this? First, does anyone know if this scene has any basis in fact in connection to the battle of Fredericksburg or at any time during the war? I suspect that paintings such as this one are marketed to people who hold more of a sentimental view of the war rather than anything grounded in history. Perhaps that is not surprising. It should come as no surprise that the majority of paintings and other items advertised in Civil War publications depict Confederate scenes. Even the cover of this issue is curious. What exactly is Jackson doing with his horse and why should I even care? What is the soldier to Jackson’s left looking at, not to mention the two men on his right? Perhaps there is some need to draw a connection between Saint Jackson and Saint Francis of Assissi. Speaking of horses, I love the paintings of a group of horses where you can’t tell which leg belongs to which animal. I remember one painting where there were too many legs given the number of horses present in the painting.

I shouldn’t end by knocking all Civil War painters because I happen to have a fancy for Don Troiani’s work. In fact, if you visit my home office you are not only surrounded by bookshelves, but also by Troiani paintings. I have seven large scenes framed on my office walls. Right in front of me where I now stand to do computer work hangs Troiani’s painting of the 69th N.Y.V. at Antietam. To its left is his more recent “Mahone’s Counterattack” at the Crater. I enjoy Troiani’s work because it is clearly the result of some research and a care for capturing the story as accurately as possible. Yes, you can have a bit of glory mixed in as seen in “Until Sundown” which depicts John B. Gordon and Lee at the Sunken Road at Antietam. And who can argue with Troiani’s obsession with getting the regimental flags just right.

Beyond Troiani’s goal of accurately painting the men in their uniforms and in the historically correct settings I appreciate that he does not usually get stuck knee-deep in Lost Cause silliness. His painting of Mahone’s charge at the Crater is a case in point. Take a look at John Elder’s painting of the Crater and you will see an interpretation that fits neatly into the postwar era. Black soldiers are painted in a way that minimizes their bravery and their fighting prowess. Troiani’s painting shows black soldiers right in the middle of the action, defending the flag, and prone to the same sense of confusion and cowardice as any white soldier.

I guess in the end the old rule applies: To each his own.