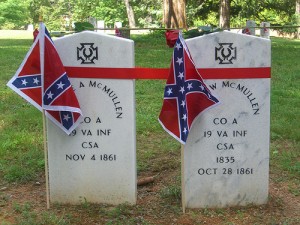 Last Friday I took my Civil War class on a little field trip over to a cemetery at the University of Virginia.  The cemetery contains the remains of roughly 1,900 Confederate soldiers who died in one of the hospitals here In Charlottesville during the war.  It was a perfect day for a walk.  The cemetery contains a statue of a Confederate soldier that sits atop a pedestal which includes the names of the men by state and regiment.  The cemetery itself is a bit deceiving as there are only a small number of headstones spread around the field.  It is difficult to explain why specific stones were placed, but my guess is that at some point after the war either individual families or organizations raised the funds for the marker.  The funds for the statue (which was forged in New York) and pedestal were raised by the Ladies Memorial Association and dedicated in 1893.

I gathered the class around the statue, provided a bit of background of the site and then passed out a sheet with a few questions.  Students were expected to spend some time to think about each question and choose an individual marker for further reflection.

Question 1. In your opinion, what was the intention of the sculptor of the monument; what message was he trying to convey?  Do you think he was successful?  Why or why not?  What features of the monument stand out?  Be specific.  Student Response: “He was trying to give the Confederate soldiers their own share of glory. Fate he said, did not grant them victory – it is a distinction between ‘they gave up on their cause, their side’ and ‘they were beaten honorably’ – he succeeds in giving the confederates honor, from the inscription to the proud soldier on top of the monument.

2. What name would you give to this monument?  Explain. Student Response: “Eternal Glory,” “Courageous Confederate,” “Honorable Confederate,” “The Last Stand”

3. Find one of the smaller grave markers.  Based on the information given, what can you infer about the indivudial buried?  What additional questions would you like to have answered?  Student Response: (1)”John Barlow died at age 33.  At that age he probably had a family. I wonder if is family has ever visited him.” (2) “He was clearly an old man when he died, and his old age may have contributed to the injuries he sustained on the battlefield.  I would be interested to know why he fought at such an old age.” [Thomas Jefferson Caulley was 60 when he died]

4. How do you feel about what you have seen? Student Response: (1) “Conflict between feeling really reverent for the dead soldiers and knowing that they fought for the Confederacy. Most of the soldiers are so young.” (2) “I feel like I have alot more respect for those who fought bravely for what they believed in.” (3) “Kind of weird that I am standing on hundreds of people who died in the Civil War.  I caught myself picturing the people.”  (4) “It makes the war really come to life.  Many people died for the cause.”

My hope is that this exercise at least presents an opportunity for students to empathize with some aspect of the site.  At one point I asked the students to join me in one corner of the cemetery to talk about one particular gravestone.  It is the marker for Private John L. Lanford who served in Co. K, 5th South Carolina Infantry.  He was only 16 when he was wounded at First Bull Run and brought to Charlottesville.  The age is significant given that most of my students are older.  We spent some time thinking about this young man’s life and they shared their own thoughts about what it might have been like to be alone and far from home.

The last question above is meant to force students to feel as oppose to thinking about the past.  I don’t think we emphasize the emotions enough in the classroom, including our ability to sympathize and empathize.  [Hugo Schwyzer blogged about the place of the emotions in his classroom.]  Part of this is the strict distinction that many maintain between the emotions and reason.  The emotions tend to be downplayed as states that happen to us rather than something we control.  On my view this is a false dichotomy, at least that is what cognitive scientists have been telling us in recent years  The emotions include significant content and provide relevant information for serious reflection about the past.

Providing these experiences for students is important as it is more likely to lead to a long-term interest in the subject compared with life in the classroom.  It also allows them to build an emotional connection to the past.  And its a pretty cool way to spend time with a bunch of interesting kids.