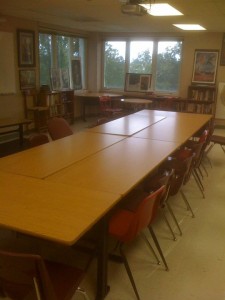 The other day I had an awkward moment in one of my classes.  We were discussing the events leading up to the American Revolution and were focusing specifically on the Boston Massacre.  At some point I made the comment that the act on the part of Bostonians to dress up as Indians was itself disrespectful to the British.  Perhaps I intended to say that the dumping of the tea was disrespectful to private property rights or something along those lines.  Well, one of my students asked what I meant in suggesting that the costumes were disrespectful to the British.  Great question and shows that my students are actually paying attention.  The mistake I made was trying to explain my way out of it when it was clear to me, even as I was speaking, that I had no clue what I meant.  What a stupid thing to do – a mistake that I don’t typically make in class.  Usually I turn to the student and say, “You know…I have no idea what I meant by saying that.”  Problem solved.  That moment served as a reminder to me that the ego always needs to remain in check in the classroom.