Oh How They Loved Their Horses

I came across an article in the Roanoke Times today that made me chuckle.  Here is the crux of the “argument” 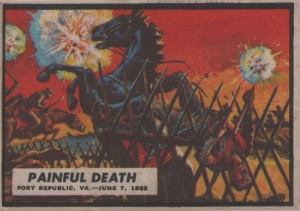 At the start of the war, Southern men took to the cavalry with a gusto bred of their normal outdoor living. As a result, at the start of the war, the South had the much better cavalry. In the North, winter weather dictated that life was much more given to indoor and business operations, and the horse, while an important mode of transportation, was not as firmly part of life as it was in the South.  The South was able to field competent cavalry units made up of men who had spent much of their lives in the saddle.

Despite the region’s dominance in manufacturing and transport, the North had no tradition of horsemanship. At the start of the war, Northern military leadership was poor and cavalry operations were either omitted or were seldom used.

Now I will be the first person to admit that I know nothing about horses or cavalry or the relative merits of the Federal and Confederate cavalry during the Civil War.  I once reviewed Ed Longacre’s Lee’s Cavalrymen and felt like a fish out of water.  That said, this argument hinges way too much on the overly simplistic distinction between an agrarian South and industrial North.  It gives short thrift to the overwhelming numbers of Northerners who continued to earn a living on small farms.  Of course the North is in the process of building its industrial base, but the statistics that place the largest numbers of people in cities and working in industry come from the last few decades of the nineteenth century.  At its worse this argument reminds me of that scene in Gone With The Wind where Mr. Wilkes comes galloping over the brook towards Scarlet at the beginning of the movie.  Of course no Yankee could ride with such grace and determination.

I’m sure it can be argued that at the beginning of the war certain aspects of Northern military leadership suffered, but what does that have to do with a “tradition of horsemanship”?  I know it’s just a short newspaper article, but this is a sentiment you see all too often.

Leave a Reply to GreenmanTimCancel reply