A Book We All Should Read 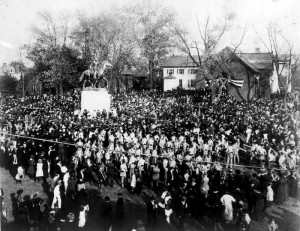 My copy of Chandra Manning’s What This Cruel War Was Over: Soldiers, Slavery, and the Civil War (Knopf) arrived today.  I’ve mentioned Manning’s scholarship on a number of occasions.   It was a great pleasure for me to be able to join her for a panel discussion about Civil War soldiers at the most recent AHA meeting.  I’ve read a great deal of her work over the past two years and have used Manning’s North and South Magazine articles in my Civil War class.

This book should receive a great deal of attention as it focuses on an important topic and has been released by a popular publisher.  Manning explores the way soldiers on both sides of the Potomac understood the issues of slavery and race over the course of the Civil War.  This is a touchy issue for many Civil War enthusiasts and for Americans generally.  We’re not very comfortable talking about these issues and tend to steer clear at all costs.  All too often these discussions, including specific questions and answers are framed in ways that reflect more about how we would like to understand Civil War soldiers rather than the soldiers themselves.  For instance, in an attempt to distance slavery/race from the world of the Confederate soldier we mention how few actually owned slaves – as if ownership were somehow a sufficient reason to ignore the ways in which non-slaveholders may have understood and responded to the “peculiar institution.”  On the other hand, we prefer to distance Union soldiers from the same issue by asserting blanket statements about the primacy of preserving the Union over emancipation.  In both cases there is little willingness to explore the complexity of the topic or the ways in which the war transformed the men on both sides in relationship to these issues.  In contrast to this overly simplistic stance on what is perhaps the central issue of the war and American history we have no problem appreciating the voracious appetites of those people who leave no stone unturned in tracing the excruciating minutiae of a Civil War battlefield.

Manning’s book is steeped in archival sources.  There are literally hundreds of individual soldier collections, and Manning kept “data sheets” on 477 Confederate soldiers as well as 657 Union soldiers.  In addition, Manning utilizes for the first time over 100 regimental newspapers.  What Manning has given us is arguably the most complete study of how Confederate and Union soldiers understood slavery/race throughout the war.

If we listen to what soldiers had to say as they fought the Civil War, the men in the ranks do not allow us to duck the uncomfortable issue of human slavery, but rather take us right to the heart of it.  They force us to look at it unflinchingly, and what is more, to see it a as a national, not simply southern, issue that defined a war and shaped a nation. (p. 18)

As you might imagine I will have much more to say as I make my through this book.  In the mean time go out and buy this important book.