Who Is James I. Robertson? 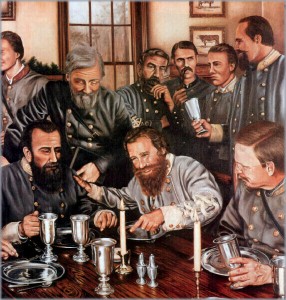 In response to Saturday’s short post John Maass inquired about historian James I. Robertson.  Here is his comment:

I have always puzzled over Robertson’s role in the academic world. In fact, even though he teaches at a university, he really does not fit in the mold of “academic,” that is to say, he doesn’t go to many or any academic conferences, has no real record producing graduate students of note, etc. Seems like he carved out a niche for himself long ago as the guardian of Confederate mythology, and has never been taken to task by his academic fellows. I’m not saying he was wrong to do so, I just have always found it curious.

I found John’s suggestion that Robertson is best characterized as a “guardian of Confederate mythology” to be worth pursuing.  A few quick points before proceeding.  It is important to keep in mind that Virginia Tech, where Robertson teaches, only has an M.A. program; a number of their students have entered top-notch PhD programs and onto successful careers in the field.  Robertson is responsible for a number of them.  I too have never seen Robertson at an academic conference, but I would never hold that against anyone as I often find myself second-guessing a decision to travel to one of those dog and pony shows.

No doubt John speaks for many in his characterization of Robertson.  I’ve speculated on this blog as to why Robertson was so enthusiastic about Ron Maxwell’s Lost Cause-inspired Gods and Generals or his more recent endorsement of a book about Stonewall Jackson’s relationship with his slaves and local black population.  In the case of the former I’ve never come across a statement from Robertson re: his involvement and/or a rationale for his enthusiasm for the movie.  [If you have a reference feel free to pass it on.]  I was much more disturbed by Robertson’s decision to write a preface for a book that characterizes the relationship between Jackson and his slaves as one of friendship.  It smacks of the very same paternalistic arguments that the slaveowners themselves used as well as later historians such as U.B. Phillips and others in the Dunning School.

Others have characterized his award-winning biography of Stonewall Jackson as overly wedded to the Lost Cause tradition.  I actually have little to say about this.  Robertson published the book with a popular press and my sense is that there is enough there to satisfy the demands and interests of the academic world as well as the general reader with a more traditional bent.  There are sections that I find frustrating and troubling, but in the end I learned a great deal about Jackson.  Actually, I much prefer his biography of A.P. Hill (Random House, 1987).

The perception of Robertson as someone who aligns himself too closely with neo-Confederate types stands in sharp contrast to his role as second executive director of the Civil War Centennial Commission.  Robertson was brought in, along with Alan Nevins as chairman, to salvage the centennial following an inauspicious beginning which emphasized entertainment over education and scholarship.   More importantly, the national commission had all but ignored issues of race and emancipation as an integral component of commemoration.  Robert Cook details Robertson’s participation during the Centennial in his new book, Troubled Commemoration: The American Civil War Centennial, 1961-1965.

It is important to remember that Robertson worked as a doctoral student under the direction of Bell I. Wiley.  Wiley was involved in the the planning of the centennial from the beginning and pushed vigorously for organizers to focus on education and for it to deal with issues of race.  His suggestions initially fell on deaf ears, but his promotion of Robertson to replace Betts served in part as a vindication of his own agenda.  Robertson was ideal for the position, according to Cook.  He was enthusiastic in his support of activities for the commemoration of the Emancipation Proclamation, but Robertson also hoped to keep attention focused on the past rather than on the ongoing Civil Rights Movement.  In this sense, Robertson’s southern credentials proved to be ideal as he was both able to encourage a more inclusive commemoration program as well as assuage the concerns of southern state commissions which had expressed concern about the national commission’s political agenda from the beginning.  Unfortunately, by the time Robertson and Nevins took control of the national commission interest throughout the country was declining, in large part because of the Civil Rights Movement.

Robertson has done more to bring the Civil War to the general pubic than anyone in recent years.  His books are read by both academics and more casual readers and his Virginia Center for Civil War Studies does an excellent job of educating high school teachers.  I honestly don’t know how to explain the relationship between Robertson and the various neo-Confederate groups that he spends so much time with.  Given all that he has accomplished, however, I’m not sure I really even care.