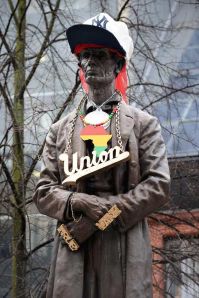 This week my Lincoln class is exploring Lincoln’s courtship and marriage to Mary Todd.  I was surprised to learn that a few of my students actually have preconceptions about this marriage and that they conform to the general belief that it was a rocky relationship and particularly difficult for Abraham Lincoln given the personality of Mary Todd.  Our reading of William Gienapp’s short but thorough biography of Lincoln reinforced these common assumptions.  As a way to challenge some of these preconceptions I had my class read an article by Jean H. Baker who is the author of one of the only scholarly full-length biographies of Mary Todd.

In the first part of the article Baker explains what she takes to be the fundamental problem for Lincoln scholars when analyzing their marriage:

Mostly the depictions of the Lincoln marriage as a disaster focus on Mary Todd Lincoln’s failings.  Of course, it has always been women who are held responsible for the quality of a marriage, for many reasons not the least of which is that men write history and have especially controlled the Lincoln story. [(p. 37) references are to Boritt’s The Lincoln Enigma]

Baker goes on to suggest that this bias has helped fuel the ever popular image of Lincoln as the “martyr of American mythology.”  Not only did Lincoln “save the Union” but he did so in an unhealthy and unhappy relationship.  She is particularly critical of Douglas Wilson and Michael Burlingame who place much of the blame on a supposed unstable relationship on Mary Todd specifically.  Both historians emphasize other women including the popular Ann Rutledge and even emphasize lesser known figures such as Mathilda Edwards and Sarah Rickard.  The upshot, according to Baker is “Lincoln, a man universally viewed as uncomfortable with women, is transformed into a veritable Don Juan.”  Baker concludes that the explanations of Burlingame, Wilson and others tell us more about how they choose to view their marriage than about Lincoln’s marriage specifically:

My response is that we have too many historians deciding that they don’t like Mary Lincoln and with extraordinary vehemence extrapolating their personal judgments onto the marriage.  Douglas Wilson and Michael Burlingame don’t like Mary Lincoln; that does not mean that Abraham Lincoln did not, nor more relevantly, does it mean that the compact that Mary Todd and Abraham Lincoln fashioned in the nearly 23 years of marriage was not a satisfying one from which both partners gained emotional support, physical satisfaction, and intellectual intimacy. (pp. 37-38)

The class had a field day with this introductory section of her argument.  It also served as a lesson on how to structure an analytical essay.  I asked the students to think about Baker’s strategy of first criticizing how others have analyzed the Lincoln marriage and then offering her own interpretation.  More interesting, however, is Baker’s suggestion that gender has influenced previous Lincoln studies.  There was a hint of defensiveness among some of the male students, but I was able to keep them focused on the main points of the argument.  I gave the class a basic overview of gender history and its very recent introduction to the academic landscape.  In doing so I emphasized both the possibility of biological differences between the way men and women interpret their environments along with the more practical considerations of what counts as legitimate historical topics or questions.  One student argued that Baker was moving too far in the opposite direction and another suggested that there was too close an identification with Mary Todd which perhaps compromised her own claims to objectivity.

We had a wonderful discussion about these and related issues, but in the end it came down to the question of whether Baker could offer a more convincing thesis.  According to Baker, the missing element is historical context rather than an emphasis on “the battle of the quotations” which highlight various claims made by Lincoln that do point to a difficult marriage: “In what follows I would like to place the Lincoln marriage in the context of the scholarship that we have on courtship, wedding, marriage, and parenting, using mostly the words and behaviors of the marriage’s two principals and avoiding memories of their contemporaries.” (pp. 40-41)

Without getting into too much detail Baker proceeds to counter the standard interpretations of Lincoln’s “cold feet” shortly before the scheduled wedding along with the suddenness of the actual wedding ceremony.  Lincoln’s decision to end their courtship is explained by pointing out that delays were actually quite common at this time, and as for the “spur of the moment” decision to finally go ahead with the ceremony in 1842 reflected the fact there “was no standardized wedding ritual.” The other thing that Baker does in this piece is ask her reader to examine the story from a different perspective:

Burlingame and Wilson ask the question, how could Lincoln have married such a dreadful woman?  But we could ask as well, what did Mary Todd see in Abraham Lincoln, the hardly handsome or gentrified product of the prairies of Kentucky, Indiana, and Illinois who still wore pants that were too short and who once burst into a party saying the “girls smelt good.”

That passage alone raised quite a number of eyebrows as it drove home her central point that it is men who have defined the very questions we ask when interpreting Lincoln’s courtship and marriage to Mary Todd.

I am going to end this post here so as not to give too much away.  In other words, read Baker’s biography as it is the product of a talented and thoughtful historian.  It’s enough to say that she is giving my class a great deal to think about.  I’ve also decided to use this article at the beginning of my Women’s History course next semester.  It addresses the essential questions or relevancy of gender history/studies.