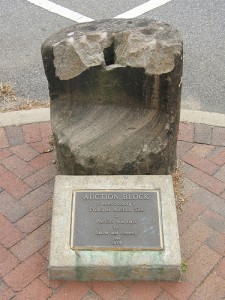 Just sitting here thinking about what I might say in my keynote address marking the 145th anniversary of the battle of Fredericksburg. I am going to center my remarks on how I use the battlefield to teach. I’ve brought my students to the Chancellorsville/Fredericksburg battlefields for the past 5 years. It’s always a new experience depending on where we go as well as the interests of my students. One of my favorite walks begins in the downtown area of Fredericksburg where we discuss the crossing of the Army of the Potomac and the civilian experience, including the town’s slave population. One of the more interesting stops on our route towards Marye’s Heights is the slave auction block, which is located at the corner of William & Charles Streets.

Thinking about the scope of my comments is difficult as I have an inclusive view of what a battlefield ought to include, especially when my students are involved. It’s never simply about the movement of troops, but the experiences of the men involved along with the bigger issues that defined the war, including its cause and aftermath.  I guess all I want to say is that without this auction block there is no Fredericksburg battlefield.  They are inextricably linked.

A few questions to consider: (1) How many Southern towns have preserved sites such as this?  (2) Why did the city of Fredericksburg preserve this particular site after the war?