VMI Will March in Inaugural Parade 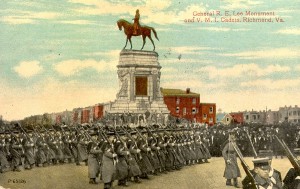 One of my readers has informed me that the Virginia Military Institute’s entire Corps of cadets will march in Barack Obama’s inaugural parade.  Why is this significant?  The Corps, along with Thomas J. Jackson were present at the execution of John Brown in 1859.  Most notably, the Corps took part in the Battle of New Market in 1864, in a war whose purpose was the perpetuation of slavery and white supremacy.  Even as other military schools transitioned to admitting African Americans into their programs, VMI remained steadfast in refusing to do so until 1968.  Perhaps it’s just another sign of how far we’ve come as a nation.