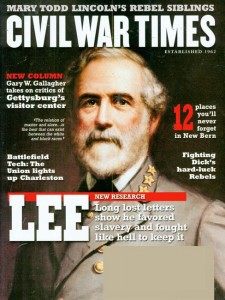 Not convinced?  Just check out the cover of the latest issue, which announce that R.E. Lee “favored slavery and fought like hell to keep it.”  Well, serious students have known this to be the case for some time now, but with Dana Shoaf at the editorial helm we can be assured that a much broader audience will be forced to wrestle with some fundamental assumptions about Lee and the war in general.  Dana has done a magnificent job of introducing much more sophisticated essays to the magazine that cover a wider range of subjects compared with just a few short years ago.  This issue also includes a column by Gary Gallagher on the new visitor center at Gettysburg as well as an interview with Joe Glatthaar about his new book on Lee’s army.  Gallagher’s review touches on points I’ve been making over the last few months [scroll down].

Once my subscription runs out with North and South I am going to subscribe to CWTI.  [I would have added a link to their website, but it is still down.]  I’ve been very disappointed with the quality of the magazine of late.  The writing has suffered and the essays themselves have been rather boring.  The latest issue includes a photograph of Keith Poulter on a camel.  Well, I imagine it is fairly difficulty to run a magazine from such a location.