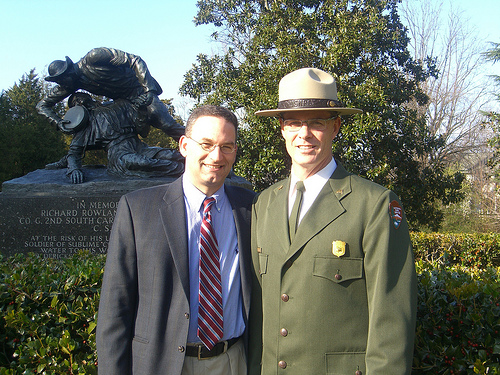 It finally hit me early yesterday morning why I felt just a little uncomfortable about giving the commemorative talk on the Fredericksburg battlefield.  I am used to addressing audiences – either in the form of an academic panel discussion or informal roundtable setting – about the past from a detached perspective.  More specifically, I am used to exploring how battlefields have been commemorated and remembered by others, and trying my best to understand the factors, which have come to shape various commemorative forms as well as our popular memory.  Yesterday’s presentation collapsed that distinction.  I’m quite confident that those of you who have followed this blog for some time will not be surprised by the overarching theme of my presentation, but now that I think about it, there is something special about being able to present it on an actual battlefield.  In a sense, my words are now part of the commemorative history of that particular battlefield stretching back to the war itself.  I like that.

Despite losing my place at one point owing to the fact that my hands were shaking from the cold, I thoroughly enjoyed the whole experience.  Most of the 200 people who attended arrived as part of NPS historian Frank O’Reilly’s yearly tour from the downtown area up to Marye’s Heights.  I would have liked to have tagged along, but there can be no complaints when the alternative is a personal tour of the downtown area with John Hennessy.

Photos from the weekend can be found at flickr.