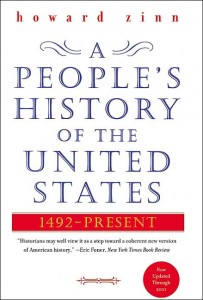 Update: Looks like Williams has uncovered more evidence in support of the popularity and pervasiveness of A People’s History in college classrooms.  What evidence?  It turns out his publisher says so on its website as well as a writer for the Socialist Work.  And there you have it. My guess is that at this very moment Williams is trolling the internet for even more sources.  Stay tuned…

Update #2 or A Suggestion for R.W.: If you are sincerely interested in the influence of this book in the academy why not compose an email and send it to every historian who teaches in a Virginia college and university.  Ask if they use the book in class and if it is used inquire into how it is used.  You may also want to ask if they have ever come across a colleague who has utilized the book in class.  I would actually be very interested in the results and it would be much more interesting than just a bunch of random quotes pulled from a Google search.

Update #3: R.W. has uncovered even more evidence of Zinn’s popularity among academics.  Check it out. Now he can go to sleep tonight knowing that he has helped to make the world a safer place by exposing this deadly cultural threat.  Sleep tight Richard.

I love checking into Richard Williams’s blog.  There isn’t much historical analysis, but there is a great deal of commentary on the politicization of history and the evil doings of the liberal elite who are more interested in foisting their marxist ideology on their innocent students and the public at large than they are in uncovering the past.  Unfortunately, I never get the sense that Williams actually reads the books and historians he critiques.  Such is the case with his most recent post on the supposed influence and popularity of Howard Zinn in the academy.  The feeling of victimization and fear of cultural and moral decline is palpable.  According to Williams, leftist academics adore Zinn and intentionally ignore its lack of references:

“Rather, he’s [Zinn] praised by other cultural Marxists. As a matter of fact, his book is used in many colleges and universities in America, and some high schools as well.  But, of course, we know that most academics have no bias or agenda. If that’s so, then why would you use a resource that’s assertions cannot be verified by readers and students?”

I assume that Zinn does get support from “cultural Marxists” but notice the leap to the assertion that the book is used in “many” college and high school classrooms.  First, how many professors and high school teachers actually use Zinn’s books in class and, for those who do, how is it being used?  Well, I can speak for myself because I use at least one chapter from A People’s History in my AP classes every year.  I usually pear it up with a similar chapter from Paul Johnson’s A Story of the American People.  It doesn’t take long at all for my students to be able to pick out the numerous problems with Zinn’s book.  The tone of the narrative and narrowness of selection are two points that stand out in my mind.  There is also a self-serving quality to the narrative; if you want to find class conflict in our history you will surely find it in the historical record.  My point is that perhaps Williams should take a step back and ask more serious questions about the frequency of its use and how it is used.  Of course, that would involve moving beyond an overly simplistic set of assumptions that are personally reassuring.  I don’t know one American historian who uses A People’s History to define the state-of-the field in any particular area.   There are a number of reasons why the book remains popular.   You could start with the book being referenced in the movie, “Good Will Hunting” as well as its publication by a popular press.