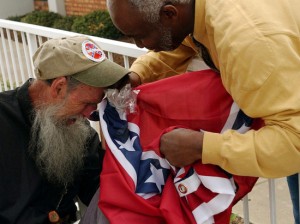 I guess I should have anticipated a decision by H.K. to use the Obama election/inauguration to unify white and black American around the Confederate flag.  My local newspaper is reporting that H.K. is making his way up Rt. 29, which will take him right through Charlottesville, Virginia to Washington, D.C.  I can’t tell where along the highway he is, but if I find out I am going to make an attempt to meet him in person.  No doubt, he is freezing his ass off, but that is a small price to pay when the goal is to highlight the loyalty that African Americans demonstrated as Confederate soldiers throughout the war.  Some choice quotes from the article:

I’m an African-American and I’m a Southerner and I believe my heritage, which is represented by the flag bearing the Christian Cross of St. Andrew, is being ignored and destroyed. It’s continuing to divide the black folks and the white folks who have a lot in common.

Mr. Obama said he is about unity and bringing this nation together. If he is truly a man of unity, I hope he will consider showing the Southerner that [the Southerner] is an important part of this country.  He could have a Confederate color guard at the White House,” he said. “He could give the Confederate flag a respected place as part of the history and heritage of this country.

It does not represent slavery, although slavery was a fact of life. The flag represents a heritage, a way of life that my forebears had. It represents the men and the families that lived together and fought together to preserve their country from invasion.  My family volunteered for the Confederacy and fought side-by-side with white Southerners and Indian Southerners. They are all my family.

I am Southerner. This flag is not about slavery, it’s about family and God and country. I have more in common with fellow Southerners like George Wallace than I do with [the Rev.] Al Sharpton. I’m from the South. I’m of the South and my family is Southern, be they white, red, black or yellow. We share a heritage and a way of life.

I’ve commented extensively on the issue of black Confederates/Confederate slaves so I will refrain from belaboring the point.  However, it is worth reflecting a bit on Edgerton’s emphasis on the Confederate experience as somehow constituting a point of unity between black and white Americans.  It’s not simply a reflection of poor history, but also of the Confederacy’s overwhelming place in Southern/American memory.  Of course this is no surprise given its importance to the region and the nation, but it clearly overshadows in a way which minimizes other significant moments in the history of the South that had the potential to bridge the racial divide.  Consider the Populist Movement led by Tom Watson, not to mention the Civil Rights Movement itself.

It’s unfortunate that H.K.’s embrace of American history is ultimately a gross distortion of it.  Fortunately, it wouldn’t take much to correct it once he arrives in D.C.  I recommend that he approach the reenactors in the 54th Massachusetts and request to march in the inaugural parade as part of a legitimate historically-based unit.  You want to honor black Southerners who sacrificed everything for their families and nation (even at a time when the Dred Scott ruling was still on the books) than don that blue uniform and acknowledge the heroism of your fellow black Southerners (1).

(1) Of course,  I am aware that the 54th was made up primarily of free blacks from the North, but you get my point.

Next post: Lee Accepts the Surrender of Grant in His Vicksburg Boots