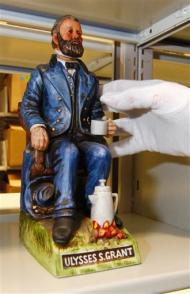 Afew months ago I reported that Mississippi State University is slated to become the new home to the Ulysses S. Grant Papers after 50 years at Southern Illinois University under the direction of John Y. Simon.  Simon’s recent death raised the question of who would continue the massive project of publishing Grant’s papers until historian John Marszalek agreed to take on the responsibility.  This is good news for all Americans interested in Civil War history regardless of where you live.  The most recent AP article covers old ground, but at some point stories such as this need to begin to move away from the obligatory Sons of Confederate Veterans quote.  In this particular piece it comes at the very end:

Still, Grant’s return to the South doesn’t thrill Cecil Fayard Jr., the Mississippi-based leader of the Sons of Confederate Veterans.  “U.S. Grant is not beloved in the state of Mississippi. Southern folks remember well his brutal and bloody tactics of war, and the South will never forget the siege of Vicksburg,” he said.

Why should we care what Cecil Fayard thinks of one of the most important academic projects in the field of Civil War history?  How many members of the SCV are there in Mississippi anyway?  Do they speak for Mississippians?  I seriously doubt it.  There is nothing offensive about an institution of higher learning taking on such a project; in fact, this is exactly why they exist.

It is becoming clearer that the SCV thrives on sensationalism – the only trick left in their book.   One need look no further than their silly little antics in Tampa, Florida where the local SCV chapter has managed to raise another one of their “big ass” flags outside of the city just in time for the Super Bowl. [This is the same group that cut up the first one for profit, and I believe both flags were made in China.]  Marion Lambert says that they are educating the public, but as the Tipsy Historian points out you will be hard pressed to find anything educational on SCV websites concerning the complex history of the flag:

Basically, there is absolutely no thought, content, consideration, or insight behind what they are doing with this ridiculous flag. The SCV Florida chapter is behaving like a screaming child looking for attention by pressing the buttons it knows will get a response. Moreover, the glaring lack of discussion on these sites makes this organization look absolutely foolish.

I know plenty of elementary school teachers and they tell me that the best way to handle children who are acting out and looking for attention is to ignore them.  Good advice.