We Are a Nation at War and…

we should behave like one.  By now most of you are aware that the new administration has lifted the ban on photographing the coffins of the Iraq war dead.  I agree with the general outline of the policy and never understood the Bush Administration’s position.  It seemed to me to fall in line with everything else they did to hide the realities of war from the general public, from the president telling us to express our patriotism by going shopping to their failure to include the financial cost of war in their budgets.  One of the things that gives the Civil War its lasting significance is the memory of its dead.  It prevents many of us from looking away and it is the photographs that constitute that visceral connection.  The same can be said for other wars such as WWII and Vietnam.  I fear that in future years we will look past the sacrifices of the Iraq and Afghanistan war dead because those connections were not allowed to properly develop in a free society. 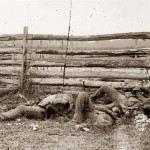 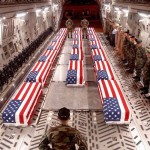 Next post: Cotton: The Fabric of Our Lives – Just Not the Lives of Slaves