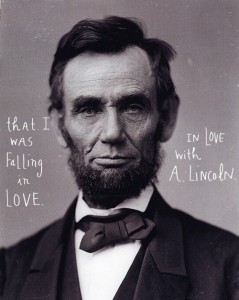 I‘ve never quite understood the vehement anger expressed by some for Abraham Lincoln. Yes, I get the libertarian concern that Lincoln’s policies reflect a fundamental shift in the size and scope of the federal government. Funny that they rarely express the same concern for Jefferson Davis who went just as far in suspending civil liberties as well as increasing the size of the federal government in Richmond. More prevalent, however is the view that has been shaped by generations of white Southerners who see Lincoln as the man who unleashed the likes of Grant, Sherman, and Sheridan on an innocent southern populace that only wanted to be left alone to govern themselves and preserve their “way of life.” The agendas of both constituencies – one economic and the other emotional/scar-ridden – end up with an interpretation of Lincoln that resonates very little with me as a historian and as a citizen.

One of the first books I read when I first discovered the Civil War back in the mid-1990s was David Donald’s Lincoln. Lincoln had never appeared on my radar screen before, but he has occupied a central place in my reading on the war and nineteenth-century America ever since. I’ve devoured well over 100 books on Lincoln and even with everything I’ve read I can still read more. No other historical figure comes close to challenging my appetite for Lincoln studies. There were a number of things that stood out in those first few books that caught my attention. I was fascinated with his early life, his apparent ambition and concern for his own future, which revealed itself early on, and most importantly, his struggle with depression. At the time I was struggling with it myself along with a lack of direction in my life. I don’t remember learning anything about Lincoln’s personal life in high school, but this aspect of his personal profile struck a chord with me and perhaps even provided me with a little strength. In short, I felt I had a connection with the man.

That said, my interest in Lincoln has never come close to hero worship. The realm of history has never provided me with a forum for developing those kinds of connections. [The only person in my life who deserves that kind of respect and admiration is my own father.] Rather, I’ve embraced the study of history as an intellectual exercise, one that involves bringing to bear my limited analytical abilities and love for a good story. I am not trying to protect or defend a preferred interpretation of any one aspect of the past nor do I see it as a stage where good battles evil. Those who do “take sides” inevitably simplify and cherry pick their narrative to suit their own personal agenda. There is very little that I believe about the Civil War compared to when I first started reading about it fifteen years ago. I hope that fifteen years from now my understanding of Lincoln and the Civil War have progressed to a similar point. There is nothing sacred in my understanding of the past; it’s all open to reinterpretation and it is something that I actively pursue.

That being said, it would be dishonest to suggest that my view of Lincoln is entirely objective – whatever that might mean. In the end, I approve of the outcome of the war, including Lincoln’s decision as commander-in-chief to begin the process of emancipation, which eventually led to the end of slavery. That said, I am under no illusions regarding Lincoln’s racial outlook, though I am struck by the difficulty of so many in distinguishing between his moral view and the specific policies he supported as president during a civil war.

More importantly, however, my outlook on Lincoln and the war stems from my pride as a citizen of this country. The union that Lincoln helped preserve is the nation that I live in and call home. I must assume that this is what undergirds most people’s understanding of Lincoln at some level. With this in mind, it seems strange to ask why Jefferson Davis or Robert E. Lee’s recent bicentennial failed to attract the same level of enthusiasm around the country. Even in the South you will find plenty of programs to honor the memory of Lincoln throughout the remainder of this year. If we accept the assumption that the South is one of the more patriotic regions of this country than it should come as no surprise that Lincoln’s life and legacy would be honored this year. The bicentennial celebrations of Lincoln seem fitting as a celebration of the history of this great nation, even if I tend to look on more as an observer rather than as a participant when it comes to its more emotional and hagiographic moments.

For me, Abraham Lincoln will always be a subject open to further study and contemplation as well as the president who helped bring an end to slavery and worked to secure the future of this nation – warts and all. And yes, I find myself falling deeply in love with the man.