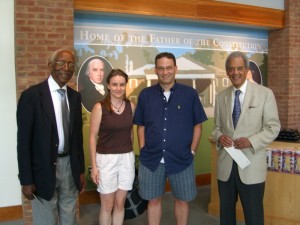 Today one of the truly gifted historians died at the age of 94.  John Hope Franklin, however, was always more than a historian.  He understood that the present and the past are closely interwoven and that the study of history is always the first step to addressing present injustices.  Duke University has set up a webpage to commemorate the life of John Hope Franklin.

My wife and I were lucky enough to meet Dr. Franklin last summer at a slave family reunion at Montpelier.  Simply put, Dr. Franklin is one of my intellectual heroes.  His career embodies a strong commitment to racial justice through activism and scholarship.  It would be more accurate to say that his scholarship is in fact a form of activism, and at 94 he was still going strong.  I especially enjoyed listening to him discuss why it is so important to tell the story of slavery as part of American history and the perils of ignoring or forgetting the past.  I like to think that my own research on Civil War memory is in a way a form of activism.  I to believe that it is important for a nation to confront its collective past in all of its richness, which includes both moments of great achievement as well as disappointment.  And I am convinced that one can keep this moral goal in mind without it impinging or threatening the integrity of scholarship.  The highlight of the day was having the chance to talk with him in person.  I truly felt like I was talking with one of the great Americans of the twentieth century and I don’t mind saying that I was just a little star struck.

All I can say is, thank you Dr. Franklin.  We will miss you.