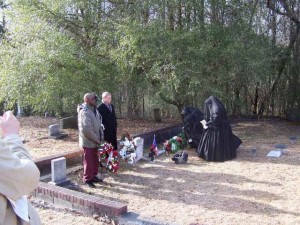 I have no idea when this ceremony honoring black Confederates (Confederate slaves) took place or who is behind this particular website, but this image of two women dressed in mourning attire is quite striking. Are the women who are placing flowers at the grave site white? If they are than we’ve come very far indeed in rewriting history and reconfiguring our understanding of race and gender in the antebellum and Civil War South.  Bizarre indeed.

“Randall Burbage, commander of the South Carolina Division of the Sons of Confederate Veterans, said Confederate heritage is something that cannot be bought or earned, but instead has been inherited through birthright.”

“Our heritage, black and white, is intertwined. It has been since the founding of this country.  It gives us the opportunity to see where we came from and where we’re going. Being a Confederate is something to be proud of. We honor these men because they are Confederate soldiers.” – Theresa Pittman, president of the S.C. Division of the United Daughters of the Confederacy

Previous post: Should the SCV and Richmond Partner to Improve Oakwood?