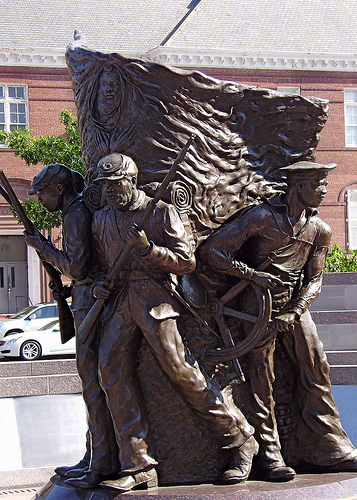 It’s reasonable to wonder how the public discourse might have been different had James Loewen and Edward Sebesta bypassed the ridiculous idea of petitioning the president not to place a wreath a the Confederate monument at Arlington and instead add a wreath to the African American Civil War Memorial in downtown Washington.  Two things would have been accomplished.  On the one hand their letter would have raised awareness of the history of the Arlington Monument and its symbolism and it would have highlighted an aspect of the Civil War that continues to fly under most people’s radar screen when it comes to our memory of the Civil War.  Instead Loewen and Sebesta provided just one more forum for the crazies who spend their days clogging up message boards with their reactionary neo-Confederate hogwash.  Just look at the comments section at HNN.

Luckily President Obama followed his instincts and/or good counsel and sent an additional wreath to the African American Civil War Memorial.  Such a suggestion from Loewen and Sebesta would have diffused most of the outrage and perhaps would have served to educate that many more people.

Finally, it’s not clear where Obama got the idea to add a wreath.  I’ve read a few references to Kirk Savage’s recent piece in the Washington Post, but that came out after my blog post and link to Caitlin Hopkins at Vast Public Indifference who suggested doing just that.