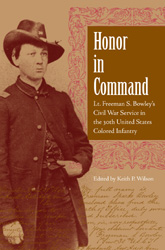 One of the most interesting Union accounts of the Crater is Lieutenant Freeman Bowley’s memoir, which was published in the National Tribune between April 1899 and September 1899.  [In 2006 Keith Wilson published these articles as Honor in Command.]  Bowley served in the 30th USCT from May 1864 till his capture at the Crater on July 30, 1864.  Bowley’s memoir is valuable for a number of reasons.  His memory is clearly intact and offers vivid descriptions of battle and life as a prisoner in Columbia, South Carolina.  In reference to the Crater it provides a detailed account of his capture and the threats he faced as an officer in a “colored regiment” both in Petersburg and while a prisoner.  Unlike some of his fellow officers who worried about the repercussions from leading blacks into battle, Bowley refused to hide his rank and unit.  There are a number of passages that are worth referencing, but I am going to confine myself to a few that bear on my previous post.

Some of the most interesting passages illustrate his interactions with civilians, particularly women.  One woman, who sold Bowley some dumplings following his capture at the Crater said the following: “‘Yo’ Yanks is all a miserable lyin’ set of thieves, come down yere to steal we’uns niggers.  If I was a man I’d git a gun and shoot ye dead; I’d git a sword and chop yer to pieces.'”  Once out of Petersburg the prisoners were shipped by rail to Danville where they stayed for a short period.  A group of citizens met the train and were outraged at the site of black soldiers and their “abolitionist allies”:

A crowd of citizens gathered around the depot.  The sight of negroes among the prisoners excited them greatly.  Cries of “Kill them! Hang the nigger!” resounded on all sides.  Two officers were pointed out as being officers of colored regiments.  The mob howled with fury and some one brought a rope.  The two officers, Lieut. Shell [Shull], 28th USCT, and Lieut. Dowling [Downing], 31st USCT were dragged from the car, and it seemed as though they were to be hanged then and there.

Luckily the men were not executed, but the rage expressed that day must be understood as the desire to see the leaders of a slave rebellion executed rather than simply as retribution against a hated enemy.  A few weeks later while being imprisoned in Columbia, South Carolina Bowley had another experience with a white Southern woman:

Visitors “to see the Yankees” were an almost everyday occurrence, and the guards never failed to designate me as “That thar little Yankee cuss is an officer in a nigger regiment.”  I had never made any retort, until one day a woman made the remark, “He ‘un had orter be hung for makin’ the niggers fight we ‘uns,” when I turned and said, “Yes, madam; I am an officer of a nigger regiment and I am proud of it.  The time will come when the blackest nigger who wears blue will be a better man than any rebel who ever wore gray!”  The woman flushed, furious with anger.  “If I had my way, I’d kill all you Yankees who came down here to fight we ‘uns and steal we ‘uns niggers–niggers we brung up jes’ like our own children–an teach ’em to fight we ‘uns,” she said.

I think we should not lose sight of the fact that Bowley’s recollection of this woman’s response comes roughly thirty years after the war; however, we should note that it fits perfectly within the paternal mindset of white Southerners who viewed their slaves as family and who believed that discontent and outright rebellion must be understood as external.  Bowley and other USCT officers continued to worry about their status and safety throughout this period.  They wondered specifically as to whether Confederate authorities would enforce an act that stipulated that any white officers captured on the field of battle leading black soldiers would be treated “as inciting servile insurrection.”  Within the framework of a slave rebellion this act of the Confederate Congress does not seem like such a radical turn.  In fact, it fits neatly into long-standing assumptions surrounding what to do with those who would incite complacent slaves against their caring masters.  Bowley witnessed it first hand.

Leave a Reply to MikeCancel reply

Next post: Women as Objects in Civil War Art

Previous post: Was the Battle of the Crater the Last Slave Insurrection in the Western Hemisphere?