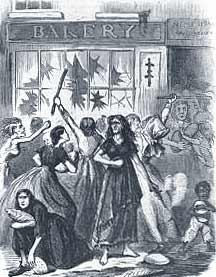 It’s difficult to deny that the image of women in the work of contemporary Civil War artists tells us much more about the individual artist than the reality of women’s lives or the way those lives were transformed during the Civil War.  I pick on Mort Kunstler quite a bit, but his characters beg for analysis and often ridicule.  Such is the case with his most recent offering, “Autograph Seekers of Bel Air.”  One could even go so far as to suggest that in a great deal of the Civil War print culture women don’t even exist outside of the gaze of men or, in this case, fawning over men – usually Confederates.  Historians of the Lost Cause have noted the role that women played in support of the Confederate cause and their admiration for Confederate chieftains such as Jackson, Stuart, and most importantly, Lee.  Of course, while there is a great deal of evidence to support such claims, it also offers a very narrow view of women that obscures class distinctions and the hardships that they faced throughout the conflict.

I recently finished reading Stephanie McCurry’s lead essay in the newly-published collection, Wars Within a War: Controversy and Conflict Over the Civil War (UNC Press, 2009).  McCurry focuses on poor soldiers’ wives who took steps to organize in response to an increasingly encroaching Confederate government which left them with serious food shortages and unprotected from the Federal army and slaves.  In her analysis, McCurry uncovers interstate communication and organization that led to food riots in Richmond and Petersburg, Virginia, Salisbury, North Carolina, Atlanta, Georgia and Mobile, Alabama.  According to McCurry, the extent that the war politicized women involved a renegotiation of their relationship with the state.

McCurry’s essay (part of a larger and much anticipated book project) represents a small piece of a much larger story about women during the Civil War that historians have uncovered over the past few decades.  Much of this literature has redefined what we know about women, their roles, and the consequences of the war on the place of women in the polity.  It would be silly of me to inquire into the absence of these women in contemporary Civil War art.  Most of these images tell us very little about the lives of Southern white women during the war, though they tell us a great deal about how white men today choose to depict them or what they hope their customers (white men) will want to purchase.  And that is their purpose.  They reaffirm an image of women as apolitical and submissive in the presence of men and a world where gender roles have been solidified.  Northern women may have pushed for the suffrage, equal pay, and other anti-discrimination laws, but not white Southern women.  They have always been content to worship and serve at the altar of men.