Was Grant a Drunk? 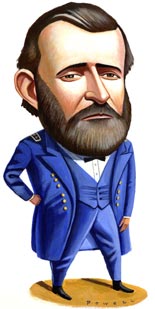 Yesterday I received the page proofs for Joan Waugh’s new book, U.S. Grant: American Hero, American Myth (UNC Press, pub. date, 11/15).  I’ve read the first chapter and I am enjoying it very much.  It’s part biography, cultural history, and memory study.  The first chapter covers his life up to the Civil War and includes a short section on the controversy surrounding Grant’s drinking.  Anyone familiar with recent Grant studies already knows that the evidence against Grant is weak or inconclusive.  According to Waugh and others, Grant drank occasionally, but not “when it counted” and rarely in excess.  Included in Waugh’s analysis are a few references to the image of Grant the drunk in our popular culture.  They include an episode of The Beverly Hillbillies called “The South Rises Again” (1967) and a short story published by James Thurber in 1930 called “If Grant Had Been Drinking at Appomattox” in which the author imagines a hung-over Grant surrendering to Lee.  It’s pretty funny:

General Lee, dignified against the blue of the April sky, magnificent in his dress uniform, stood for a moment framed in the doorway. He walked in, followed by his staff. They bowed, and stood silent. General Grant stared at them. He only had one boot on and his jacket was unbuttoned.

“I know who you are,” said Grant.’You’re Robert Browning, the poet.” “This is General Robert E. Lee,” said one of his staff, coldly. “Oh,” said Grant. “I thought he was Robert Browning. He certainly looks like Robert Browning. There was a poet for you. Lee: Browning. Did ya ever read ‘How They Brought the Good News from Ghent to Aix’? ‘Up Derek, to saddle, up Derek, away; up Dunder, up Blitzen, up, Prancer, up Dancer, up Bouncer, up Vixen, up -‘”.

“Shall we proceed at once to the matter in hand?” asked General Lee, his eyes disdainfully taking in the disordered room. “Some of the boys was wrassling here last night,” explained Grant. “I threw Sherman, or some general a whole lot like Sherman. It was pretty dark.” He handed a bottle of Scotch to the commanding officer of the Southern armies, who stood holding it, in amazement and discomfiture. “Get a glass, somebody,” said Grant, .looking straight at General Longstreet. “Didn’t I meet you at Cold Harbor?” he asked. General Longstreet did not answer.

“I should like to have this over with as soon as possible,” said Lee. Grant looked vaguely at Shultz, who walked up close to him , frowning. “The surrender, sir, the surrender,” said Corporal Shultz in a whisper. “Oh sure, sure,” said Grant. He took another drink. “All right,” he said. “Here we go.” Slowly, sadly, he unbuckled his sword. Then he handed it to the astonished Lee. “There you are. General,” said Grant. “We dam’ near licked you. If I’d been feeling better we would of licked you.”

Next post: “West From Appomattox” or Is That Grant?