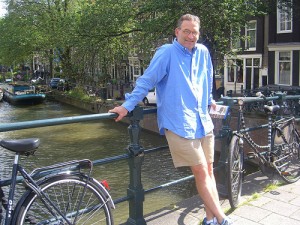 It’s nice to be home, but I wouldn’t be honest if I didn’t say that I am already missing Amsterdam.  In fact, I would love to spend a few more weeks, if not months, in the city.  Actually, it’s the first foreign city where I can imagine living.  The people are simply wonderful and the city itself is beautiful.  They are unpretentious and, with just a little prodding, some of the friendliest people that I’ve ever met.  The Dutch have mastered the art of living.  There are plenty of book stores and cafes in which to read and converse with friends.  It was nice not seeing a Starbucks on every other corner.  Public transportation is a snap.  The city’s international profile is a breadth of fresh air.  Things clearly get done, but there is no rat race.  As many of you know, people get around predominantly on bicycles, which translates into what appears to be a pretty healthy society – a lesson that we here in the United States need to take seriously.  A trip to Amsterdam really does highlight how dangerously overweight and lazy we are.  The nights are long so there is plenty of time to walk after dinner.  People sit on their porches with a bottle of wine or look out from their beautifully lit apartments.

Michaela and I spent much of our time walking along the canals, exploring narrow side streets, and eating plenty of good food.  Each morning started in a little cafe with croissant and other assorted pastries.  We hit the main art museums, including the Van Gogh Museum and Rijksmuseum along with a number of historic tours such as the Anne Frank House, which I will comment on at some point later.  Let’s just say it was one of the most moving experiences in quite some time.  We also took a day trip to Den Haag to see the sites and Vermeer’s “The Girl With the Pearl Earring” in the Mauritshuis.   The art is simply spectacular.  The Van Gogh museum gives you a nice overview of the evolution of his work during the last few years of his life, but I was also impressed with their collection of Redon.  And as much as I enjoy Rembrandt’s use of light I couldn’t get enough of the fanciful winter scenes painted by such artists as Jan Steen and Adriaen van de Venne.  In fact, I bought a nice little collection of these images in one of the museum stores.

The food is as wide ranging as you could possibly want.  The best part of dining overseas for me is you never have to worry about being rushed out of a restaurant.  You can sit as long as you want and the waiters never clear your plate before the other person is finished.  I have a great deal of difficulty sitting for long stretches of time in restaurants here in the states, but without the anxiety of having to vacate a table I am able to sit for hours overseas.  It’s a cultural difference, but a crucial one at that.  You enjoy both the food and company that much more.

I hope you will understand if things are a bit slow around here for the next few days.  My mind and heart are still in Amsterdam and I have a couple of books that I want to finish, including a biography of Anne Frank and a short history of the city.  I actually just ate a 2-day old croissant from Amsterdam rather than the crap that passes for one here in the states.

Next post: A Civil War Title That is Too Good to be True