A Visit to the Anne Frank House 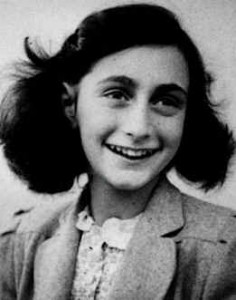 I do not consider myself to be a religious person.  Yes, I was raised in a reformed Jewish household, but following my Bar Mitzvah I made a conscious decision to forgo further religious education; this suited my parents just fine.  I didn’t particularly enjoy my Wednesday afternoon Hebrew classes; in fact, it would be more accurate to say that I loathed these sessions.  Like most kids at that age I was much more interested in sports and hanging out with friends on the beach or the arcades on the Atlantic City boardwalk.  I’ve stepped into a synagogue on a handful of occasions since my thirteenth birthday for the weddings of friends and family.  Still, the time spent in synagogue did instill a sense in me that I am a Jew, despite the fact that I do not practice any formal aspect of the religion.   This self-identification was instilled, in part, through a heavy emphasis on the history of antisemitism and profound suffering as well as the redemptive power of good deeds and the hope of better times for Jews around the world.  It should come as no surprise than that I learned quite a bit about the Holocaust.  We discussed the relevant history as well as the nature of evil and the moral responsibility that was both embraced by all too few at the time as well as the countless numbers who turned a blind eye or who took part in the murder of 6 million Jews.  Looking back I see much more clearly just how close we were (growing up in the 1970s) to the event itself.  We had a number of Holocaust survivors in our congregation who spent time with us to talk about their experiences.  At about that time I learned that most of my family on my mother’s side was lost in the camps at Auschwitz-Birkenau.  I first read Anne Frank’s diary at the age of 10 and than again in high school.  Like millions of children around the world who continue to read it, I was moved by her story and forced to measure my own struggles and fears against those faced in that tiny attic room at 263 Prinsengratz in Amsterdam.   To this day it is the Holocaust that serves to remind me of my Jewish identity, but it is Frank’s diary that will forever serve as the face of that tragic and sad time.

It is with this in mind that my wife and I set out to visit the Anne Frank House last Tuesday.  I was torn as to how to go about my visit.  On the one hand I wanted to experience the space in which the family lived and which produced such a remarkable document.  At the same time I wanted to take a critical look at how the site is interpreted.  Thankfully, there was very little to interpret and I suspect that this was intentional on the part of those who organized the site for visitation.  There is no furniture in the rooms and other than a few exhibits the visitor is left to contemplate the different spaces of the apartment and office that comprised the building.  There is a short video (and I mean short at just over a minute in length) in the first room that shows footage of Hitler discussing the Jewish problem as well as images of the liberation of the camps.  This short video sets the stage for the rest of the visit.  There are no lengthy interpretive signs that provide a historic background to the Holocaust or WWII and I think I now understand why.

It is Anne’s diary that serves as a guide for the visitor.  For most visitors the home is first and foremost where Anne Frank lived and where she described her most personal thoughts, hopes and fears as well as the lives of the rest of her family.  I suspect that interpretive signs focused on the broader history of the Holocaust would have created the false impression that Anne’s life was somehow representative of the lives of 6 million.  Nothing could be further from the truth.  The diary represents one unique perspective on those horrifying years and, coupled with the actual space in which it was written, creates a unique experience for the visitor.  The lower levels, which served as the office space for Otto Frank’s company includes a few exhibits such as the typewriter used by the secretary, but I found myself continually looking for those stairs that would take me up to the attic.  The first indication that two very different worlds co-existed in that house between 1942 and 1944 is the fake bookshelf that hides the passage leading to the attic.

The rooms themselves include even fewer displays.  Instead the visitor is left to imagine the spaces as described in the diary.  Specific references are clearly visible in the various rooms.  Markings on the wall measuring the height of the children during the 25 month captivity are clearly discernible as is the hand drawn map that Otto used to mark the Allied advance in 1944.  Anne’s room still includes the images of movies stars and other magazine cutouts that she used to give her living space a more personal touch.  I found myself running my hands along the walls, sinks, and other objects that were present during their captivity.  The decision not to clutter these spaces or rope them off in any way is critical to the visitors’ experience.   You are free to explore every little nook and cranny of the space.  The most powerful spot for me personally was looking up at the attic window which served as the only spot where Anne and the rest of the family could look out on the outside world.

Once finished touring the apartment the visitor is led to a room which tells the final chapter of the story beginning with the arrest of the family and their eventual transportation to Auschwitz and Bergen-Belsen.  Three by five cards that served as ID markers from Auschwitz are displayed for each family member.  A display case that tells the story of the diary’s publication is included as well as Anne’s original diary.  It is quite something to be able to look upon the original document.  It’s written in Dutch which makes it pretty easy to pick out specific references.  There are two short videos, one of which is an interview with Hanneli Goslar, who was a childhood friend of Anne’s and was the last person to see her alive at Bergen-Belsen.  The second short video is of Otto Frank who reflects on his family as well as the importance of Anne’s diary.  He was struck by his daughter’s seriousness, emotional maturity, and acute observations.  As many of you know Otto failed to include critical passages in which Anne reflected on the relationship of her parents.  As close as Anne was with her father it was sad to hear him admit at the end of the interview of just how little he understood his daughter.

One final thought.  Michaela and I intended to visit the home in the middle of the day, but decided against it after noticing the line, which stretched for blocks.  We ended up going back around 9pm after dinner and were pleasantly surprised to find that we could walk right in.  I highly recommend visiting after the peek hours as this will lead to a much more intimate experience.  At times we were the only ones in specific rooms and we understood clearly what Anne meant when she described how dangerous it was to move around during the afternoon hours for fear that the workers downstairs might hear the creaking floors.  If you are looking for that kind of connection than visit in the evening.

My visit to the Anne Frank House was one of the highlights of my trip to Amsterdam last week and I highly recommend it to you if you happen to find yourself in the city.

Previous post: A Civil War Title That is Too Good to be True