This post was published last year at this time and since my students are preparing essays on the subject I thought I might offer it once again. 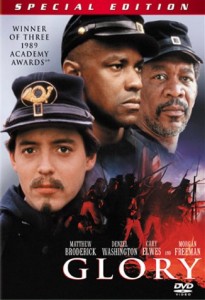 Today my Civil War classes finished watching the movie Glory, which is still my all-time favorite Civil War movie. Students enjoy the movie in part because of the heroic story of the unit and the performances by Denzell Washington, Morgan Freeman, and Matthew Broderick. The movie does a very good job of addressing the discrimination faced by the 54th Massachusetts as well as their heroic performance at Battery Wagner in July 1863. Like all historical movies Glory gets certain things right and certain things wrong. One of the themes that the movie captures is the slow progress that Col. Robert G. Shaw experienced in learning to more closely empathize with his men as well as the gradual changes that took place among white Union soldiers as they questioned their own racial outlook in response to the battlefield prowess of black regiments like the 54th. This is an issue that my students recently read about in an article by Chandra Manning. As for problems, well, they abound throughout the movie such as the profile of the regiment, which is presented primarily as a unit of fugitive slaves. Most of the men were free blacks from Massachusetts. Other problems include the time frame for the raising and training of the regiment which began in 1863 rather than 1862 as well as the failure to acknowledge Shaw’s marriage at any point in the movie.

Beyond pointing out such oversights throughout the movie I want my students to be able to think critically about the choices that go into historically-inspired movies such as Glory. Such questions can include character development and the broader message that movie producers and writers hope to convey to their audience. In reference to Glory what stands out to me is the emphasis on a progressive story where the individual characters as well as the unit itself becomes more closely connected or identified with the national goal of emancipation and nationalism. Col. Shaw (played by Broderick) volunteers his regiment in the attack on Battery Wagner as a means of impressing upon the nation the sacrifices and bravery displayed by his men. Tripp (played by Washington) begins the movie with an overtly selfish perspective, gradually comes to see the regiment as family, and finally falls in battle while holding the stars and stripes. Even Thomas, who represents the free black men of the regiment and comes to learn during training that he has more in common with fugitive slaves, finds redemption and self-respect by volunteering to carry the flag before the assault on Wagner.

The decision to end the movie with the failed assault at Wagner solidifies this progressive theme, which links the men to one another and, supposedly, the goal of the United States by the middle of the war. The final scenes depict the grim reality of the battlefield, including shoe-less dead black soldiers, and a mass grave in which both Shaw and his men are buried. As the movie ends the viewer is told that the performance of the 54th Massachusetts led to the recruitment of upwards of 180,000 men and that President Lincoln credited these men with turning the tide of war. The upshot is that the viewer finishes the movie with the impression that the story of the 54th has been brought to its completion, in large part, because of the death of Shaw. It’s as if the mission of the unit, in terms of its contribution to the Civil War and American History, has been fully realized. It is through defeat and death in the regiment that the nation experiences a new birth of freedom.

The problem is that this completely ignores the history of the regiment through to the end of the war and the challenges that it continued to face. In fact, a broader look at the history of the 54th suggests that it was not at the hands of angry Confederate soldiers that constituted the gravest threat to black Union soldiers, but their own government. It is with this in mind that my students are now reading a wonderful article by Donald Yacovone, titled “The Fifty-Fourth Massachusetts Regiment, The Pay Crisis, and the “Lincoln Despotism”” which is included in the edited collection, Hope and Glory: Essays on the Legacy of the 54th Massachusetts Regiment (University of Massachusetts Press, 2000).

The “pay crisis” is depicted in that wonderful scene where both Shaw and his men tear up their vouchers after learning that they are to be paid under the terms set out in the Militia Act of 1862 – $10 for black soldiers as opposed to $13 for white soldiers. Unfortunately, the scene is used to highlight the evolution of Shaw’s identification with his men and is promptly dropped as an issue. Well, it was an issue throughout much of the unit’s history and it grew worse following the failed assault at Wagner in July 1863 and Shaw’s death. The article does an excellent job of detailing the steps that both the men of the 54th and its new colonel took to convince the Lincoln administration to rectify the situation. The situation continued to deteriorate following the Federal defeat at Olustee, Florida as tension in the ranks grew culminating in cases of mutinous discontent. The most notorious case occurred on February 29, 1864 when Sergeant William Walker faced a firing squad for protesting unequal pay after ordering his company to stack arms in front of their colonel’s tent in November 1863. Shortly thereafter, Private Wallace Baker was arrested and executed for striking an officer after refusing to obey an order to fall in for company inspection, also in protest over pay.

It was not until July 1864 that Congress revoked its stance on the issue and awarded the men equal pay from the first day of their service. I am hoping that this broader focus will give us much to discuss in class tomorrow. I want to touch on questions of how Hollywood shapes our perceptions of important historical events as well as how this broader focus helps us to anticipate the challenges of Reconstruction and the federal government’s eventual abandonment of these men and the cause of black civil rights. This reminds me of my favorite scene in the movie which precedes the assault at Wagner. Shaw approaches Tripp and asks him to carry the regimental colors in the next engagement. Tripp refuses and a brief conversation ensues regarding the possible consequences of the war. At one point Tripp asks, “What are we going to get”? The movie leaves the viewer with a sense of optimism for the future; on the other hand, Yacovone’s piece better prepares students with the tragic quality of Tripp’s question.