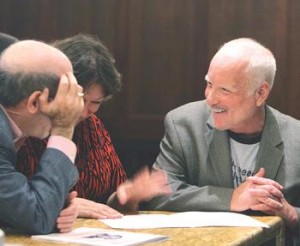 I know, I know, I know…you don’t want to hear any more about Richard Dreyfuss.  [see here and here]  Well, this will probably be it.

There seems to be a generational divide regarding Dreyfuss’s speeches.  While Dreyfuss himself has admitted that he has had difficulty reaching out to high school kids an older generation seems to be lapping up his doomsday scenarios about the future of this nation and the supposed incompetence of our youth.  But isn’t that the way it always is?: “Every generation thinks it;s the end of the world.” [Wilco]  Dreyfuss received a standing ovation earlier this week in Gettysburg after speaking at the annual commemoration of Lincoln’s address.  Geez, what a surprise given the profile of his audience.  I would love to know how many in the audience attended these same exercises when they were in high school?  More to the point, Dreyfuss’s perception of our youth clearly reflects no interaction with the very people that he claims to be so concerned about:

Tell Steve Jobs and Bill Gates to help us create games that make us more thoughtful and able to think things through instead of wasting the computer power that sent us to the moon and back on the blood-splatter of gangster video games.

And there you have it.  We are doomed because our kids are spending way too much time playing video games.  This is the same argument I heard when I was growing up.  It was idiotic then, but to suggest it now makes Dreyfuss irrelevant to the very issue that he claims to be so passionate about.  My students were eager to discuss Dreyfuss’s presentation in class.  The first question asked was what I thought about it, but there was something about the way the question was asked that stuck out.  My students wanted me to defend them, not in the sense of dismissing Dreyfuss’s comments out of hand, but more from an angle of, “Mr. Levin, are we really that bad?”  I suspect that this is why Dreyfuss is not having much success in public and private schools.

The truth is that this generation of teenagers is more connected to the world around them than at any time in this nation’s history.  They have access to information that even my generation could not conceive of in high school.  Every generation has engaged in deviant behavior that horrified their parents, but it doesn’t take much to notice that technology has placed students in the drivers seat and they are doing remarkable things with it.  There is no crisis concerning civics education or an epidemic of civic detachment among our youth any more than there was among previous generations.

To be completely honest, I am truly optimistic about the future as a result of having worked with students in various places.  That Dreyfuss received a standing ovation for the above claim about Jobs and Gates tells us much more about the speaker and his audience.  It reflects what they know about computers/technology and the broader culture.  As far as I am concerned they are already dead to the world. It doesn’t take much effort at all to see the myriad ways in which students today are connecting with others and trying to make a positive difference and they are doing it because of Jobs and Gates.

Finally, while in Gettysburg Dreyfuss unveiled his civics initiative.  Let’s be clear about this.  Dreyfuss has no initiative.  It makes absolutely no sense at all to talk about an initiative when your website looks like this.  An initiative, at the very least, includes programs, resources, and a way for individuals and organizations to communicate with one another.  All he is at this point is a traveling soothsayer.