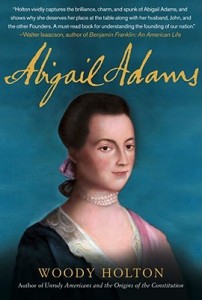 I try to keep this running list of new titles confined to this blog’s subject matter.  Professor Holton was one of my professors while in graduate school at the University of Richmond.  I worked with him on an independent study and got a chance to read a section of his Adams biography in manuscript form.  Since then I’ve eagerly awaited its final publication. My relationship with Abigail Adams is very complex.  I’ve always found her history to be intriguing; however, since the HBO series I’ve had a major crush on Laura Linney, though I can’t tell how much of it is directed at Linney as opposed to Adams.  Luckily, I have a very understanding wife who is helping me to work through all of this.  If you thought you knew everything there is to know about Abigail Adams you will want to read this book.

Kirk Savage, Monument Wars: Washington, D.C., The National Mall, and the Transformation of the Memorial Landscape (University of California Press, 2009).

Next post: Why Are We Forgetting To Order the Pedestals?