Why Are We Forgetting To Order the Pedestals? 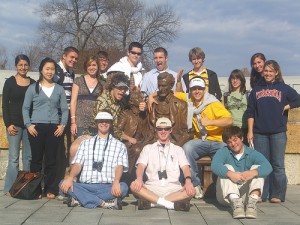 Perhaps I’ve spent too much time studying how Americans have used public spaces to commemorate and remember their past, but I don’t get overly emotional around statues and other such sites.  My first thought is almost always about the people – including the profile of the individual/group – who chose to shape a particular landscape with some kind of commemorative marker and the values that they hoped to impart to the public.  In addition to the intentions of those who established the site there is the history of how the space is interpreted and consumed by subsequent generations.  In all honesty, I rarely think about the object being commemorated.  In short, for me public spaces of historic remembrance are almost always about the living.  In most cases the objects themselves have little to do with shaping public behavior, especially if they sit atop pedestals.  You can have a barbecue, play chess, or engage in polite conversation without ever considering the namesake of the location.

In the past few decades, however, we’ve seen a welcome change in the world of statuary.  Statues can now be found sitting on benches or in stride, ready to engage any and all passerbyes.  There is something refreshing about this change.  No doubt, for some the reverence that has traditionally been attached to these objects has been lost; according to this view such objects are appropriately placed at a distance away from common folk in order to strike a sense of awe and wonder.  The values they impart are to be considered timeless.  I don’t believe there is anything timeless about commemorative sites; the land used for the Lincoln Memorial was a swamp before it was completed in 1922.  The objects themselves as well as the surrounding landscape are by their very nature open to interpretation and change.  We decide what they mean and how we will engage them.  That’s what I love about the placing of statues on the ground level.  The objects engage us and in turn shape the way we interact with one another.  Consider the room in the National Constitution Center, which contains statues of the men who took part in the convention of 1787.  You are just as likely to find visitors engaged in serious conversation as you are making faces and having their photographs taken.  The room itself is constantly in flux depending on who is in it and how it is being utilized.  It’s all good.

Lincoln seems to be a popular candidate for such purposes.  Although I always enjoy visiting the Lee Monument in Richmond I just can’t imagine sitting next to him on a park bench.  I wouldn’t know what to say.  Because of our collective memory of Lincoln, which emphasizes his “everyman” qualities, it is easy to imagine running into him and striking up a conversation.  While we all know the bench sculpture of Lincoln and Tad at Tredegar in Richmond, there is a new one at the Gettysburg Visitor Center, which you can check out at the Gettysburg Daily blog.  I hope this is a trend that continues.