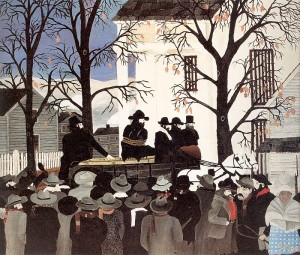 I guess we should have anticipated such a move on this sesquicentennial of John Brown’s raid at Harpers Ferry.  It’s an indication that Brown’s reputation has taken a significant turn since the end of the 1960s and that even Virginia may have a different outlook (at least northern Virginia) on this crucial moment on the eve of the the Civil War.  While I don’t know much about David Reynolds, I am surprised to find his name attached to this project.  As many of you know, Reynolds teaches at CUNY and is the author of John Brown, Abolitionist: The Man Who Killed Slavery, Sparked Civil War, and Seeded Civil Rights, which is one of the best of the recent crop of Brown biographies.  Reynolds has not issued a formal statement, but you can read his thoughts in the following news article.

Let’s remember that many Americans we honor had as many or more flaws in their character and behavior: Washington and Jefferson owned slaves, Columbus has been understandably accused of genocide, and Lincoln shared the racial prejudice of his time and long wanted to deport blacks once they were freed.

I have no interest in signing this petition, but it is available here.  Interestingly, the Online poll has supporters of a pardon far ahead.  I’ve never had an interest in demonizing or celebrating John Brown.  That said, I’ve always found those studies that emphasized some kind of psychological imbalance to be completely off the mark.  It’s nice to see historians such as Reynolds finally work to place Brown’s plan in its proper context by analyzing the extent to which his plan and actions were influenced by slave rebellions in the Caribbean and elsewhere.  That we’ve spent so much time arguing that he was “crazy” tells us much more about the difficulty subsequent generations have had coming to terms with Brown.

Previous post: Civil War or War Between the States?