What Is It About the Civil War and Christmas?

The two seem to go perfect together, but why?  Well, I guess in Fredericksburg it is the proximity of the famous battle to the holiday season that makes for such an easy connection.  Joyce Smith, a parishioner at Cornerstone Baptist Church, has written a Christmas Civil War drama titled “My Friend, the Enemy” which is based on the Mort Kunstler print by the same name. 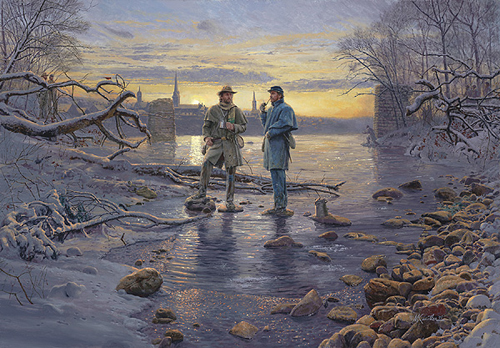 According to the news story, Smith “studied the picture for months.”  I’m not quite sure what there is to study that would keep one occupied for months, but it culminated in a play that essentially reenacts a meeting between four soldiers on Christmas Day 1862.  Stories of Civil War soldiers meeting to trade and talk are powerful narrative threads in our continued obsession with the Reconciliationist Narrative of the war.  They make the war palatable.  I can only imagine the dialog: (1) What the war is about; (2) Why must we be enemies?; (3) Family and Home…  The play ends with a meeting between two soldiers on Christmas Day 30 years after the end of the war followed by the singing of Christmas Carols.

Americans need to believe that their civil war was special, that the violence did not overshadow our faith in “Good Will Toward Men.”  I tend to think that we emphasize these stories to make ourselves feel better about what happened and why.  It give us a reason not to look too closely at ourselves and our collective past.  Our civil war needs to fit neatly under the Christmas tree.  When we cross the Rapphannock River we want to see two soldiers peacefully engaged rather than thousands of men crossing on the eve of a bloody battle or fugitive slaves crossing to their freedom.  So be it.  Take the family to see this one and remember to bring plenty of good cheer and egg nog.